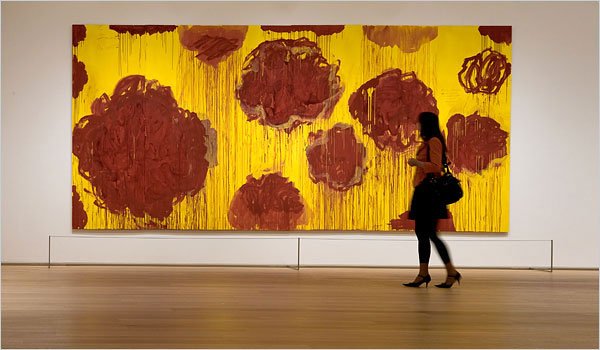 A work by Cy Twombly at the new Modern Wing at the Art Institute of Chicago. More Photos >

This wing adds 264,000 square feet of interior space to the institute’s floor plan, making it the second-largest museum in the country after the Metropolitan Museum of Art. This includes 60,000 square feet of new galleries that are dedicated to European painting and sculpture; art since 1945; photography; and 20th- and 21st-century architecture and design. And there is a good-sized temporary exhibition space being inaugurated by an exceptional show of recent paintings, sculpture and photographs by Cy Twombly, who is in top form at 81.

The expanded space could allow the museum to redefine its relationship to the recent past, the present and the future. It instantly places it well ahead of the Met in terms of contemporary art. And its spacious architecture and design galleries, which lead off with a cache of rare architectural drawings, outrank the Museum of Modern Art.

But a newly completed museum wing of this scope is by definition the beginning of a longer, more subtle work in progress. It is now the curators’ turn to explore its strengths and limitations.

The main strengths here are two suites of galleries on the second and third floors that are at once grand and intimate. The biggest problem, stated simply, is that the Modern Wing accommodates only the classic, European version of modernism. American art from 1900 to 1945 has its own, quite generous galleries in the Art Institute’s 1988 expansion, the Rice Wing.

But nothing is perfect, least of all in a museum. While this separation may reinforce a version of modernism that seems outmoded, there are signs of change being fomented from within.

The building’s kindness to art is especially palpable on the third floor, thanks to plentiful skylights. Straight ahead in the first gallery hangs a Matisse 1909-17 masterpiece, the serene yet implacable “Bathers by a River,” suffused in natural light. Around the corner you’ll find treasures like Juan Gris’s 1912 Cubist “Portrait of Pablo Picasso,” a figurative ziggurat built mostly from blocks of Pointillist blue, and Joan Miró’s 1918 “Portrait of Juanita Obrador,” a tightly wound woman in a black-and-white striped dress, an image that is as solid as Gris’s Picasso is not.

Throughout there are deviations from modernism-as-usual: “Composition With Red Arrow,” a small Popish abstraction from 1918 by the Romanian Dadaist Marcel Janco; a 1936-37 painting of (I think) brightly wrapped packages by Maria Elena Vieira da Silva that equivocates between magic realism and abstraction; and a wonderful little tropical fantasy by Leonora Carrington. This last work is part of the museum’s extraordinary Bergman Collection of mostly Surrealist art, which forms a kind of cabinet of curiosities at the heart of the third-floor galleries.

The Bergman trove includes a phalanx of 30 boxes by Joseph Cornell, an American. That collection contains the only artists on this floor who developed outside Europe, primarily Arshile Gorky, Matta and Wifredo Lam. (The exception is the Parisian expatriate Man Ray, who is in the Bergman collection and elsewhere in these galleries.)

There are also recent acquisitions and promised gifts to admire: a sulfurous early farmscape by Mondrian; a shimmering Bonnard still life from 1926; a blocky, abstract sculpture in cast plaster by Georges Vantongerloo, also from 1926; and Magritte’s enigmatic “White Race,” from 1937, which dissects a female bather, evoking both Picasso’s monstrous paintings of Olga and his pneumatic treatments of Marie-Thérèse Walter.

In the final gallery Picasso’s mountainous “Nude Under a Pine Tree,” from 1959, locks eyes — and a grandiose sense of scale — with a demonic 1945 portrait by Jean Dubuffet. Its wide slashing strokes amaze. Franz Kline must be just around the corner.

And of course he is, downstairs on the second floor. Unfortunately Kline’s classic black-and-white “Painting” from 1952, along with other works from 1945 to 1960, are sequestered in a shallow, constricted 3,000-square-foot space. It is also separate from the big, glorious suites of galleries, and feels sidelined.

Here you will encounter Willem de Kooning’s great jangling 1950 “Excavation,” one of Abstract Expressionism’s finest moments, along with “The Key,” an obstreperous predrip painting from 1946 by Jackson Pollock that the museum acquired in 1987.

Its neighbor is in some ways even better because it is rarer: a truly great painting by Robert Motherwell, acquired only in 1997. “Wall Painting With Stripes,” from 1944, is a field of broad verticals of cream and yellowish brown interrupted by black and gray intimations of a tree, and ovals suggesting suns and moons. It is a glowering, unstoppable canvas, something left behind by Tom Sawyer and Huckleberry Finn, taking cues from Miró, on a broad, back-alley fence from a Walker Evans photograph. After works by Mark Rothko, Joan Mitchell, Barnett Newman and William Baziotes, the passing of Abstract Expressionism is signaled by a small, beautiful Robert Rauschenberg and larger works (all loans) by Lucio Fontana, Yves Klein and Jasper Johns.

In other words, two of the greatest turning points in mid-century art are cramped into this space. It can feel like a reverential chapel or an isolated cul-de-sac, depending on your point of view.

The big suite of galleries on the second floor, which is dedicated to art since 1960, swings between moments of daring new thought and late- and postmodernism-as-usual. Pop Art is expanded with works by Alex Katz, David Hockney, Sylvia Plimack Mangold and Ed Paschke. There is a small gallery devoted to six works by Jim Nutt, an outstanding but underappreciated painter, native to Chicago, whose perverse portraits and strung-out figures reflect the influence of local Surrealist collections like the Bergman.

Other surprises include a small gallery dedicated to Mel Bochner’s early painted wood wall pieces; a little-known low-lying sculpture by Bruce Nauman that can be walked on (like a Carl Andre) but is actually more interesting to read; and “It’s a New Age,” one of Sue Williams’s searingly caustic, body-oriented early paintings. Less surprising but still impressive is a gallery overly full with paintings and drawings by Gerhard Richter; two galleries devoted to the enigmatic objects (and wallpaper) of Robert Gober; and Charles Ray’s “Hinoki,” a to-scale copy of a large, dead oak tree that Mr. Ray had hand carved, in cypress, in Japan. Mr. Ray’s sculpture is a big-budget production that may become rare in the years ahead, but looking at it and gradually realizing that none of its delicate, desiccated textures are natural is a semihallucinatory experience.

Too often the post-1960 presentation is dry and correct on several levels, including politics, art theory and marketability.

Except for some of the Richters, four late Philip Gustons and single works by Lari Pittman and Marlene Dumas, European and American painting from the 1980s has gone missing. Perhaps in keeping with the Minimal-Conceptual stranglehold that has so dominated views of the art of the late ’60s and ’70s, the ’80s are now to be seen only in terms of the strictly photo-based appropriation of the Pictures Generation. I hope not.

It is dismaying to see modernism’s linear thinking — falsely narrow to begin with — persist. We depend on museums like the Art Institute, now capable of telling a much fuller, more mixed-up story, to do just that.