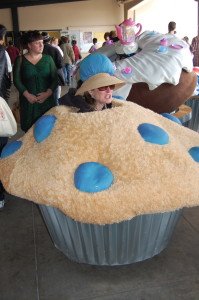 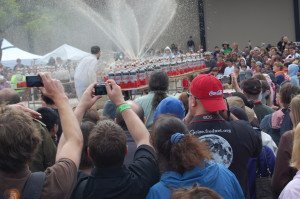 American Association of Museums conference is May 23rd-26th in Los Angles, CA and the Maker Faire is May 22nd and 23rd in San Mateo, CA.  To be honest I have a lot more fun at the Maker Faire, there is a spirit of sharing and freedom missing from Museum conferences.  If ever there is a museum topic that needs to be addressed it is a sense of freedom and sharing.  I’m going to Maker Faire, then to Los Angles to meet with people at the conference .  As a group of professionals we need to rethink this, why don’t we give up overpriced cookies and coffee and standing around in ties and have some fun!

Produced by the folks who bring you MAKE Magazine, Maker Faire celebrates things people create themselves — from rockets and robots, to DIY science and technology, to sustainable foods and upcycled clothes. More than 600 Makers are scheduled to share their inventions. The festival is expected to draw 95,000 attendees from across the state, the country, and beyond. New this year at Maker Faire Bay Area 2010 will be the Raygun Gothic Rocketship, a kitschy, retro-futuristic 40-foot rocket that debuted this year at Burning Man. Also new this year: the Flaming Lotus Girls present Soma: a sculpture that translates the anatomy of neurons into metal, fire, and light, magnifying the microscopic world to epic scale; ArcAttack!, a truly ‘electrifying’ performance by the creators of the original Singing Tesla Coils; and The Orb, a spherical surface display that can project any image or video.Other must-see Maker Faire attractions include: EepyBird showing off its Diet Coke and Mentos Mega Fountains; always a fan favorite, the Rube Goldberg-style Life-Size Mousetrap;Robotic Warship Combat in the battle pond; and lots of Tesla coils, robots, and rockets to wow the crowd.

About Maker Faire
Maker Faire is being held on May 22 & 23, 2010 at the San Mateo County Event Center. Started in San Mateo, California in 2006, and now expanding to Detroit and New York, Maker Faire is the premier event for grassroots American innovation. Held annually in each of these locations, the event may expand elsewhere in the future. Maker Faire is supported by MAKE Magazine and O’Reilly Media, the premier information source for leading-edge computer technologies. The company’s books, conferences and web sites bring to light the knowledge of technology innovators. For more information about Maker Faire, please visit http://www.makerfaire.com.