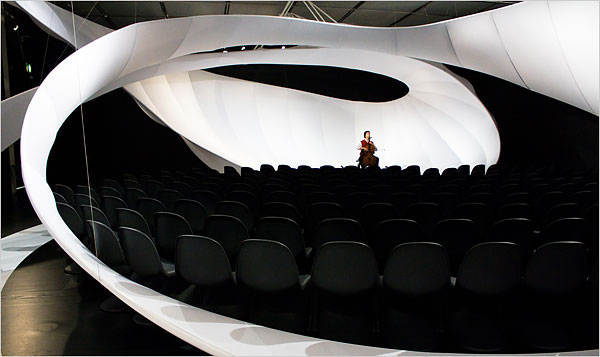 Jean-Guihen Queyras plays one of Bach’s cello suites at a specially designed space at the Manchester Art Gallery.

From the New York Times

MANCHESTER, England — A rewarding experiment in creating an ideal space to hear some of Bach’s most intimate music — the solo suites for piano, for cello and for violin — is taking place here at the Manchester International Festival. Zaha Hadid Architects was commissioned by the festival to take a top-floor exhibition room at the Manchester Art Gallery and turn what is basically a big black box into an acoustically and visually perfect place for performances of the Bach works.

When the festival opened on July 3 (before I arrived), the Polish pianist Piotr Anderszewski played three programs offering three solo keyboard suites. On Saturday night, for the second installment in this series, I heard the elegant French cellist Jean-Guihen Queyras play four of Bach’s six solo cello suites in this specially conceived environment.

Working with Sandy Brown Associates, an acoustical company, the team from Zaha Hadid has temporarily created a space within a space. Like an enormous, puffy ribbon, a long span of translucent off-white fabric with an inner metal skeleton twirls down from the ceiling in expanding circles, until it nearly surrounds the low platform stage and the seating area for some 200 listeners. The fabric, which undulates against the metal frame, both absorbs and deflects the sound. Clear acrylic acoustical panels, blended seamlessly into the overall design, hover over the stage area to further diffuse the sound.

Sitting in the enclosure was like hearing music from inside a supersize conical seashell. Between the gaps in the ribbon you could see the black gallery walls, so the effect was to create a sort of safe listening enclave within a much larger room.

In a program note Zaha Hadid, founding partner of the firm that bears her name, writes that she and her associates tried to articulate the “rhythmic and harmonic range” that Bach achieved “within the mathematical framework” of his music by exploring “a coherent integration of formal and structural logic.” I will have to take her word on this. All I know is that the space was a delight to be in and that the music sounded up-close and exceptionally vibrant.

Mr. Queyras has made a specialty of solo works for cello from all periods. Last year Harmonia Mundi released his recording of the six Bach suites, and he often performs them in conjunction with contemporary music.

In the more quick-paced dance movements from the suites, he played with rhapsodic flair, taking expressive liberties to highlight harmonic twists and asymmetrical phrases in the music, while allowing the lilt of the dances to come through with zest and naturalness. I especially enjoyed the noble, searching way he shaped the phrases of the ruminative movements, like the Sarabande of the First Suite in G. His account of the Third Suite, in C, was remarkable, especially his bold rendering of the final Gigue, with its curiously jagged theme and fractured phrases.

As an encore he played a short piece by the Hungarian master Gyorgy Kurtag called “Faith,” in which a somberly pensive thematic line goes through passing fits on its way to a resigned conclusion. It made me eager to hear Mr. Queyras play his programs juxtaposing Bach and the moderns.

The Bach/Zaha Hadid series concludes on Wednesday, Thursday and Saturday with the violinist Alina Ibragimova playing a program of Bach’s solo sonatas and partitas at the Manchester Art Gallery; mif.co.uk.