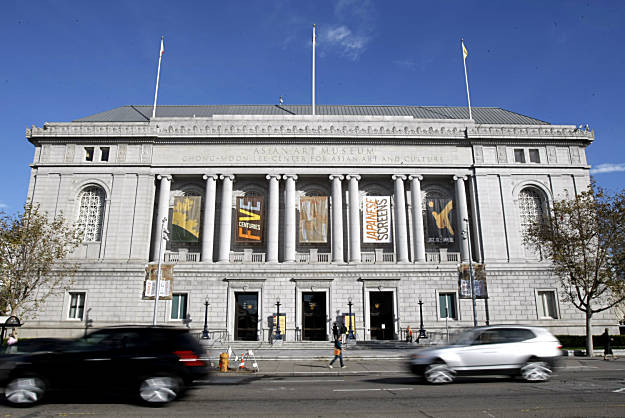 Photo by Michelle Gachet / The Chronicle

by Phillip Matier and Andrew Ross

“San Francisco’s Asian Art Museum is in dire financial straits and could be forced into bankruptcy if it can’t work out a new deal with its lender by Friday, according to knowledgeable sources.

Our sources say the troubles started in 2005 when the museum’s directors, hoping to hedge against rising interest rates, restructured $120 million worth of loans to try to save millions of dollars.

But now rates have hit rock bottom, and their lender, JPMorgan Chase, says it plans to close the Asian Art’s line of credit as of Friday – in which case, the museum would lose $20 million that it put up in collateral.

That money reportedly is insured, but one source following the developments said losing the collateral would nonetheless spell calamity for the museum.

It would still be on the hook for the $120 million in loans, but the repayment timetable would be sped up to five years from now. We’re told the museum’s current endowment amounts to just $60 million.

“They could only keep up with the payments for maybe a year or a year and a half before they would have to close their doors,” said the source, who spoke on condition of anonymity because he is not cleared to discuss the negotiations publicly.

The museum’s directors have hired bankruptcy lawyer Bruce Bennett – who helped restructure Orange County’s $10 billion debt a few years back – to try to buy the museum extra time to turn around its finances.

Asian Art reps also plan to huddle with Mayor Gavin Newsom’s people today in hopes of getting help with another line of credit. However, one city rep, speaking on condition of anonymity, said, “Nobody is using public money to bail them out.”

It’s quite a reversal of fortune for the museum, which relocated to the restored old main library in Civic Center in 2003 with the help of a $42 million city bond measure.

According to its board minutes, the museum had a balanced budget as recently as June 2009 and was racking up record attendance.

Since then, however, attendance has fallen sharply and the place hasn’t seen any donor gifts in a couple of years.

Even a ballyhooed exhibit to coincide with the opening of Shanghai’s world trade expo in May failed to draw the anticipated crowds.

The museum’s management did not return our repeated calls seeking comment, and board directors we spoke with either appeared to be in the dark or weren’t talking.

“I’m not in a position to give you the information you are looking for,” said Robert Duffy, vice president of the Asian Art Museum Foundation.

Bennett, the bankruptcy lawyer, did not return our calls. A spokeswoman for JPMorgan Chase promised to look into the matter late Friday, but did not get back to us by deadline.”