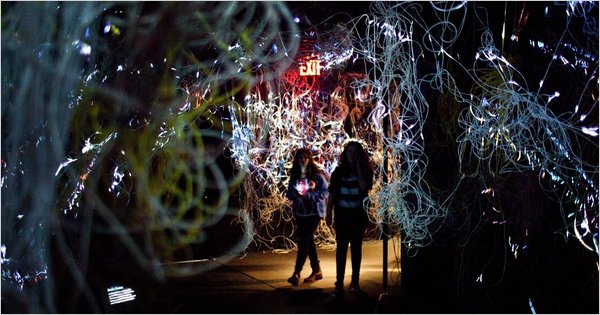 From the New York Times, November 19, 2010
Article By Edward Rothstein

“A once-living example of the most complicated object in the universe is mounted in a case at the beginning of the ambitious exhibition “Brain: The Inside Story,” which opens on Saturday at the American Museum of Natural History. And a sorry-looking object it is, if we put aside the symbolism and portentousness that have grown around it, and the research that barely has begun to dissect its innermost workings.

Approach it without preconceptions and its compressed tubular windings make it seem like a small intestine coiled for easy transport. And this particular organ on display — which undoubtedly once contemplated the world with much curiosity as its observers now do — looks particularly inconsequential and stolid; it was preserved using “plastination silicone technique.”

But it is helpful, at times, to see the three-pound human brain as a somewhat bizarre and alien thing. We must use it in order to study it, but it offers very little help. You can’t really peer into it, but it determines how we peer into anything else. For the most part, we can’t even see it or feel it do anything at all. The brain is most visible when it is most strange, for that is when its powers and limitations stand out from the background hum of ordinary experience.

There are times, in this exhibition, when that happens, when we must stop and think about the organ that makes us stop and think. (There are also, unfortunately, a few too many times when our own brains are put into passive, textbook-reading mode.) But the high points stand out. Look at a seemingly random display of colored spools of thread in the first gallery, for example, an art installation by Devorah Sperber. Gaze at that array through a spherical lens and we see that the spools actually create a pixilated and inverted image of the Mona Lisa: a neat demonstration that it isn’t just sensation that the brain processes; sensations are also given shape. In this case, we learn, the “fusiform face area” of the brain, which is utilized for facial recognition, is being put to work.

Or sit down, a little later in the show, and trace the figure of a star using a pointer, while looking in a mirror, not at your hand. There is a shocking moment of near paralysis when every familiar hand motion is rendered pitifully inadequate. It seems impossible to even follow a straight line. The only option is to stumble about, crashing against boundaries, until we learn to navigate in this mirror world.

In these cases, we actually feel something happen in our brains. There is a moment in which chaos is ordered, disarray displaced. We also come to forcefully understand that even the most trivial experiences are marked by this organ’s struggles to make sense of the world. Our brains confront themselves, glimpsing their own limits and powers.

I wish that happened more here; I found the show slightly disappointing, despite its wealth of material. It certainly rises to the standard the museum has set for design: a projection of a woman’s face displaying a range of emotional expressions hangs hauntingly in the middle of one gallery. An opening installation, by the artist Daniel Canogar, drapes the hallway with 1,500 pounds of recycled wire as beams and stroboscopic bursts of light dance over it, creating a corridor of firing neuronal networks.

The show’s scope is also considerable and comes with the imprimatur of weighty scholarship. Its curators are led by Rob DeSalle, whose work at the museum’s Division of Invertebrate Zoology accompanies research into “comparative genomics” and the evolution of the nervous system. The two other curators are Joy Hirsch, a professor of neuroscience at Columbia University and a pioneer in the analysis of brain imaging, and Margaret Zellner, a behavioral neuroscientist and psychoanalyst now at Rockefeller University.

And the landscape surveyed is remarkable, touching on emotion, sensation, evolutionary development, biological growth, neurotransmitters, even recent research into cyborglike innovations that merge brain and machine.

But for all the bright spots, the exhibition often falls short. One reason, peculiarly enough, may be that its overall approach seems guided by contemporary research and its new abilities to view brain activity using magnetic signals, radio waves and radioactive traces. The dominant focus in this renaissance of brain exploration is on brain topography — on the mapping of mental functions to different regions of the brain, thus identifying the prefrontal cortex (planning, short-term memory); the hippocampus (long-term memory); the amygdala (fear and anger); and, at the deep core of the organ, the brain stem, cerebellum and basal ganglia, associated with basic physical movements.

One gallery, for example, is meant to imitate the topography of the outer cortex as you walk around a gigantic bulbous sculpture of the subcortical brain made of opaque resin. We learn about language, reason and memory in the most gripping of the show’s displays. But this spatial analogy never seems terribly important. And when a video of a dancer preparing to audition for Juilliard is accompanied by a model of the brain whose regions are illuminated when they come into play during her practice and performance, the information only seems to emphasize that this is a very complicated object.

The biology, of course, is incredible, and it is interesting that brains physiologically change in response to learning — that, say, violinists have larger brain regions controlling left-handed touch, or that London taxi drivers who memorize the city’s complex map over the course of years have expanded hippocampus regions.

And yes we also begin to see that the arrangement of the brain is partly an evolutionary archaeology: the most primitive and ancient regions lie farthest down while the surface folds of the cortex are closest to the human in both time and function.

But the mapping of the brain, as yet, does very little for our understanding of how we think; close regions don’t necessarily mean close connections. And as brain users rather than brain students, we also want to move in the other direction. While all experience ultimately is reflected in biological and chemical activity, how is that activity, in turn, reflected in our experience?

This is one reason brain injuries, some described here, have always been so horrifyingly illuminating: they reveal that mysterious interface between biology and experience. A metal rod destroys a man’s prefrontal cortex and his emotions are also skewered; surgically removed hippocampi lead to the elimination of long-term memory. Oliver Sacks’s case histories are so gripping partly because, by stripping away the ordinary, they show the brain in all its injured peculiarity.

Some experiments in perception do something similar here: you are asked to look at words whose color is the same as their meaning (“yellow” is colored yellow), and then see how much harder it is to read words that might say “orange” but are colored blue. Or you listen to a sound while looking at an image of pouring rain, and don’t realize that it is actually the sound of bacon sizzling. When our brains struggle or are stymied, their workings become more open to observation and inquiry. This show would have thrived if it had done more with this, in the spirit of the Exploratorium in San Francisco.

But one of the exhibition’s most astonishing displays near its very end shows that in time this complaint might come to seem somewhat quaint: Biological events, human experience and mechanical devices are becoming intertwined in the latest research. An electronic camera sends electrical impulses directly into the brain through the retina; a patient manipulates the image of a hand on a screen by learning to alter brain waves picked up from sensors by a computer; regions of the brain are selectively activated by surgically inserting wires into the organ to treat brain disorders.

And when we think we’ve at least gotten a sense of the brain’s mysteries, we stumble across another. Once you see the Mona Lisa upside down in spools of thread, try going back and seeing the colors as you once did, without pattern or purpose. It is almost impossible. The brain may wrestle to understand the world, but once it does, or thinks it does, can the world be seen in any other way?