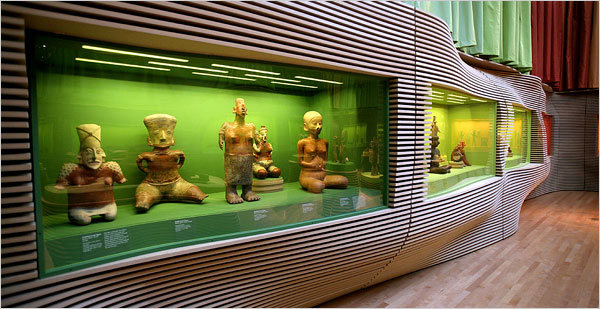 LOS ANGELES — The Latin American collection of the Los Angeles County Museum of Art is back on view after three years’ absence. And the reinstallation opens with a piquant flourish in a display of ancient pre-Columbian art that doubles as a solo show for a contemporary artist, and looks like a nightclub interior. 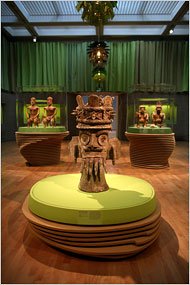 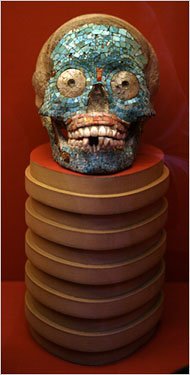 Entrance to the newly installed “Latin American Art: Ancient to Contemporary” exhibition at the Los Angeles County Museum of Art.

The artist, Jorge Pardo, who was born in Cuba, is well known for blurring the lines between art, architecture and design. Several years ago he turned the lobby of the Dia building on West 22nd Street in Manhattan into an all-over grid of brightly colored tiles: it was like a bathhouse conceived by Mondrian. The Mountain Bar, a music club he opened in this city’s gallery-packed Chinatown, is distinctive for its blood-red walls and a hanging garden of sculptural lamps.

In his design for the Los Angeles museum’s Mesoamerican collection, he has outdone himself in buzzy inventiveness. He has also, to some degree, done in the art consigned to his visual care.

For the new setting, Mr. Pardo, 45, has covered the lower walls of three galleries with units of stacked fiberboard sheets. The horizontal sheets, thinly cut, alternate with empty spaces of the same size to create a continuous light-dark stripe pattern running through the rooms. The sheets have in addition been shaped with curves and undulations, so the cavelike walls swell organically outward and recede into niches that become display cases. A few free-standing stacks suggest biomorphic sculptural forms that are also pedestals for other sculptures.

Finally, Mr. Pardo has accessorized the space with complicated colors (yellowish burgundy, electric green), zany little chandeliers and thick curtains of a taffeta-type fabric. All have counterparts in his bar design.

As an introduction to the rest of the more straightforwardly presented Latin American collection, Mr. Pardo’s extravaganza does what it is supposed to do: pull you in the door. The stripes and bulges grab and hold the eye. The colors and curtains are like cartoon versions of the faux-period embellishments we’re used to in museums. Here those conventions assume a goofy, festive air, which makes you realize how tacky the originals can be.

The trouble is that the pre- Columbian art gets lost in the décor. The museum’s collection, though relatively new, is very fine. It has superb holdings in ceramics from West Mexico and individual objects from across the Mesoamerican world that would shine in any North American institution. Virginia Fields, the museum’s curator of pre-Columbian art, memorably showcased the collection in “Lords of Creation: The Origins of Sacred Maya Kingship” a few years ago, and has taken an intriguing thematic approach to it here.

But the logic of her arrangement becomes hard to follow because the art itself is hard to see. The stripes and curves distract from objects; the colors suddenly change their look. The green in particular leaches visually into terra-cotta sculptures, giving them a liverish cast. And why this green anyway? To evoke a primal jungle setting à la Quai Branly in Paris? If so, bad idea.

These days, design is a mainstream art-world hobbyhorse and political correctness is seriously uncool. (It always has been; people are just more relaxed about dissing it now.) So we’re probably not supposed to ask questions like: How come self-aggrandizing designs like Mr. Pardo’s, which obscure rather than enhance objects and their meanings, end up being applied to non-Western objects but only rarely to their Western counterparts?

Would the museum hang, say, Rembrandt or Degas or its stunningly yawnsome Broad collection in Mr. Pardo’s clamorous setting? If the answer is yes, great. By all means do it. Truly break some museological ground. But if the answer is no, or if there’s even a hesitation, the problem becomes obvious.

The Los Angeles County Museum of Art, like other museums, has begun to invite artists to design and organize shows. This is a fantastic idea, and the results can be inspired. John Baldessari’s “Magritte and Contemporary Art” there was; so was Kara Walker’s “After the Deluge” at the Metropolitan Museum in New York. With Mr. Pardo the case is both less and more complicated. He was asked only to provide a visual context, not to choose what it would hold. This may help explain why his installation seems detached from the art it is meant to serve and overwhelms it, producing the equivalent of a Mesoamerican group show inside, and a subsidiary to, a contemporary solo exhibition.

None of this amounts to a crisis. It’s just revealing about where we are now on the politically correct front, and it’s part of one museum’s learning curve. I like Mr. Pardo’s vivacious sensibility; I just think it is misapplied here. And there are many models available for how it might have been done otherwise. The last few decades have seen a revolution in Western institutional approaches to presenting non-Western cultures. The Museum for African Art in New York has led the way. So has the Fowler Museum at the University of California at Los Angeles, one of the city’s major and undersung cultural resources.

The Fowler’s recent “Mami Wata: Arts for Water Spirits in Africa and Its Diaspora,” organized by Henry John Drewal, was an object lesson in how exhibition design can be visually magnetic, object-centered and idea-clarifying; how it can deliver both a big thrill and a hard think. The Los Angeles museum is aware of this gold mine of a resource — it recently invited a Fowler curator, Mary Nooter Roberts, to create its first African art display. Perhaps it will encourage its future artist-designers to pay the Fowler a visit. Artists, more than any art lovers on earth, will love what they see.

Jorge Pardo’s redesign of the Latin American galleries is on view at the Los Angeles County Museum of Art, 5905 Wilshire Boulevard; (323) 857-6000.