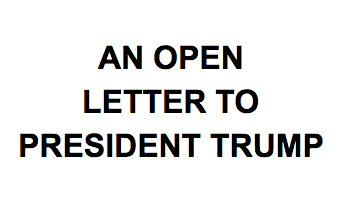 AN OPEN LETTER TO PRESIDENT TRUMP

Congratulations on your inauguration as the 45th president of the United States. I have sent you a copy of my book Museums 101 I hope that you have time to read the book.  Included with the book is a note from me:

Dear President Trump,
My wish is that you better understand the role of museums in civil society. Museums 101 is written for people unfamiliar with the purpose of museums in determining culture.
Sincerely,
Mark Walhimer

Legislators and funders are well aware of the impact of museums on community. Over and over museums are used to revitalize communities and energize business areas.

I wrote Museums 101, in response to a meeting that I had with a museum chairperson.  The purpose of the meeting was to discuss the expansion of an existing museum.  I had prepared a proposal and was presenting my presentation when the chairperson interrupted me and said “what is this stuff about educational theory, kids just need ipads”.  I was taken aback and it was clear that the chairperson and I were speaking of different objectives.  I wrote Museums 101 as a book to hand to that museum chairperson, for him to better understand the role of museums.

Recently I have been reminded of that incident and am hoping that the book is helpful for you to better understand the role of museums in civil society. When I use the word “museum” I am referring to the entire “spectrum” of museums to include: art museums, history museums, natural history museums, children’s museums, science centers, art centers, zoos and aquariums.  As a definition of museums:

A museum is a non-profit, permanent institution in the service of society and its development, open to the public, which acquires, conserves, researches, communicates and exhibits the tangible and intangible heritage of humanity and its environment for the purposes of education, study and enjoyment.(2)

The first part “non-profit” is very important and often a difficult concept for people outside the museum field. Museums are not-for-profit businesses they are mission-based businesses.  They exist to support their mission, their success is relative to their success in fulfilling their mission.

The second part “service of society and its development” is civil society.  In his inauguration speech US President George W Bush said:

‘A civil society demands from each of us good will and respect, fair dealing and forgiveness.'(3)

The words of President Bush are a useful definition of civil society.

To better understand the role of museums in civil society it is helpful to understand the word “Curator”.  The word “Curator” comes from the word “curate” “an ecclesiastic entrusted with the cure of souls”.  Museums are places of care of the soul, reflection, and discussion or as Philippe de Montebello said,  “A museum is the memory of mankind”. (5)

Museums are places for building civil society and museums are economic engines.  The two roles are connected, through a virtue of trust.  Museums are consistently ranked as the most trusted source for information.(6)  It is not possible to “break apart” museums as a vital component of civil society, economic engines and trusted resources, the virtues are intertwined.   My two hopes.  First that you carefully consider the importance of museums in civil society and continue to financially support museums through the NEA(7) and NEH(8).  Secondly, that you continue to support the mission of all museums to serve society and its development.