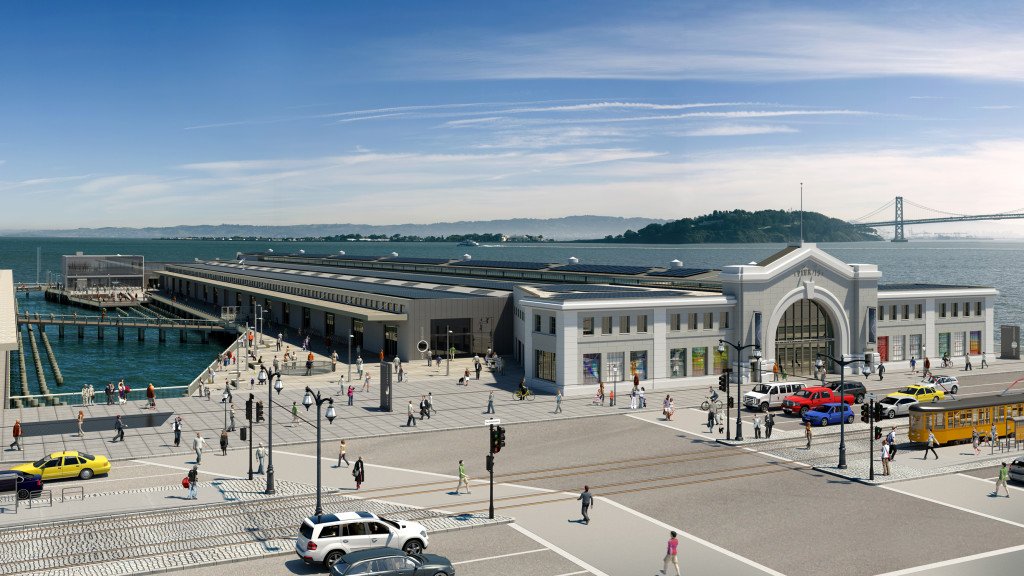 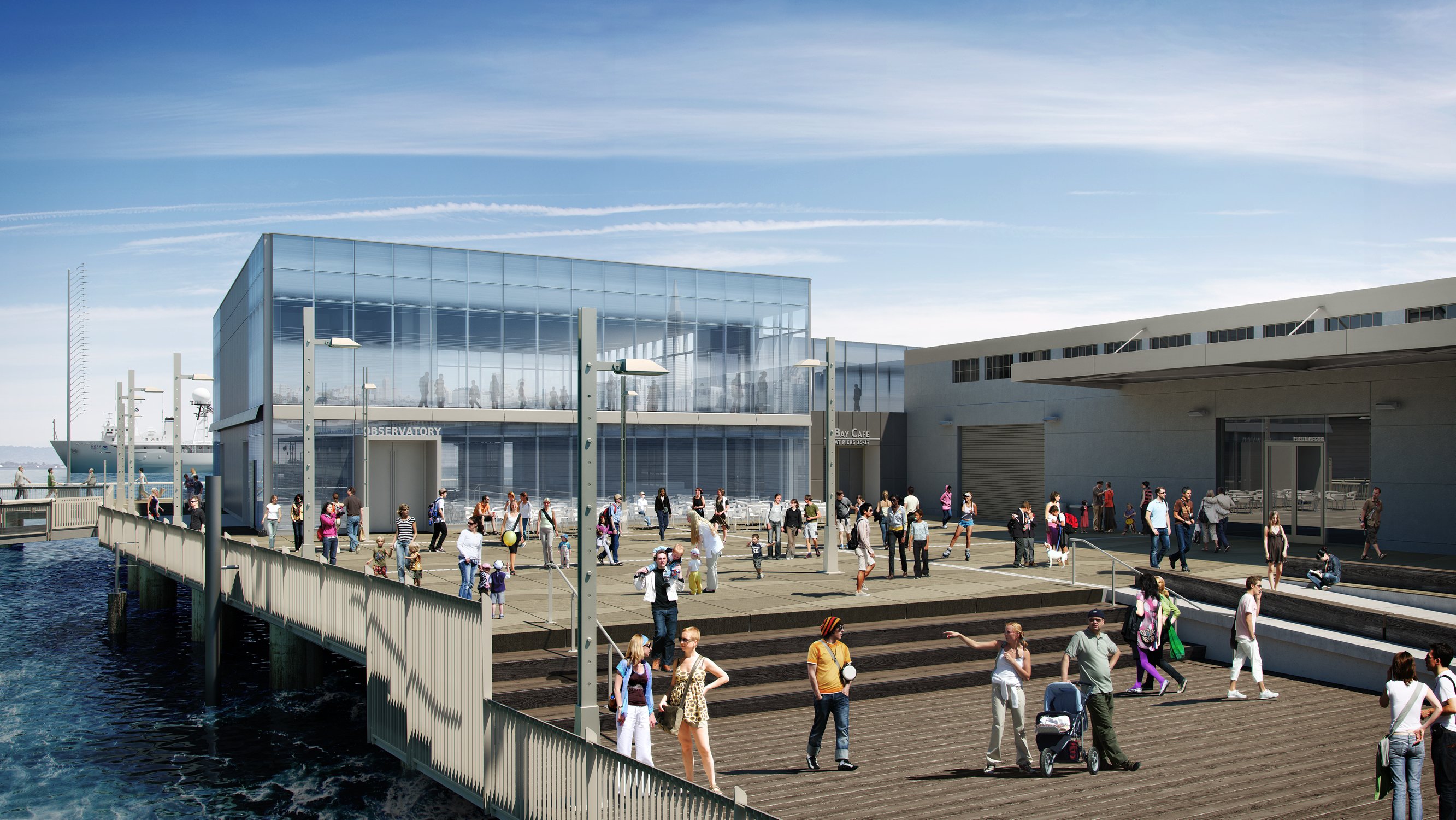 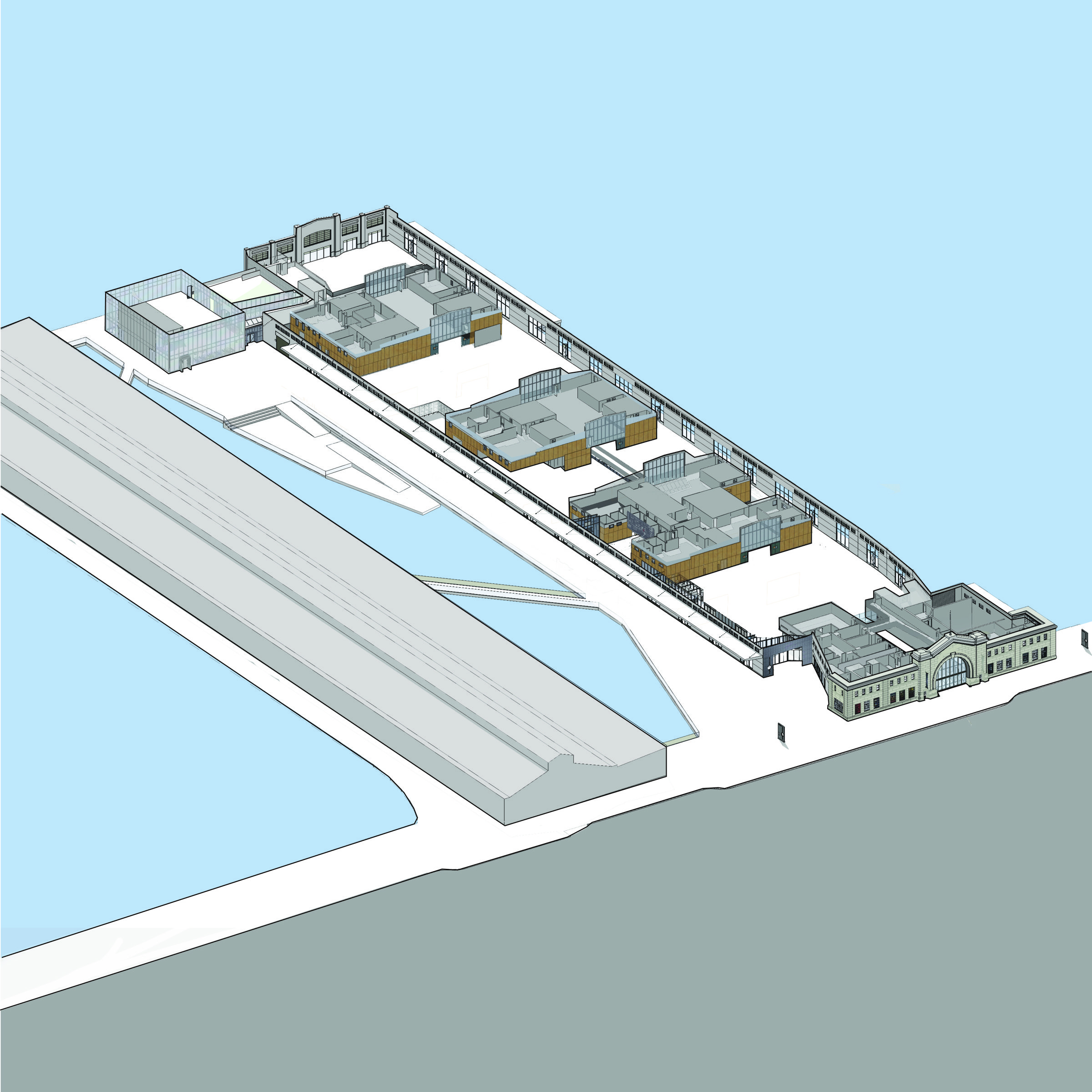 “On Tuesday, October 19, at 10 am, the Exploratorium, San Francisco’s internationally acclaimed museum of science, art and human perception, celebrates breaking ground at its future home on Piers 15 and 17, two piers on San Francisco’s historic northern waterfront at Embarcadero and Green Streets. This project continues the revitalization of the northern waterfront that the Ferry Building so successfully prompted.

Ground break is euphemistic. Dredging has already begun. Then, when the project formally gets under way, engineers will be driving piles underneath the bay to a depth of 160 ft. to replace, or, in some cases, repair and seismically upgrade, hundreds of dilapidated pilings and the substructure, which date to the early 20th century. At the same time, construction crews will begin on the east end, demolishing the non-historic building that connects Piers 15 and 17, and begin work in the interior of Pier 15, while preserving its impressive truss structure, which covers the 820 ft. length of the pier — the equivalent of a New York City block. Refurbishing and seismically upgrading a historic pier that spans the length of almost three football fields over the water will be a major engineering feat. The current timeline calls for a grand opening in 2013. The Exploratorium will remain open to the public in the Palace of Fine Arts for the foreseeable future.

The project places the Exploratorium at the heart of the waterfront, at the gateway to the City and at the nexus of public transit, radically improving educational access to all. Learning will happen everywhere. With room inside and out, Pier 15 doubles the exhibition space, doubles the number of classrooms and triples the Exploratorium’s capacity for teacher development. The Learning Commons, Learning Studio and theater provide additional places for the general community and educational professionals to gather and learn. Today, two out of three teachers are turned away from the Exploratorium’s nationally recognized Teacher Institute — considered one of the premier professional training opportunities for K-12 science and math teachers in the Bay Area and beyond. The new Exploratorium will almost triple the number of teachers who come to learn.

“The Exploratorium unleashed a bold revolution when it opened in 1969, leaving both classrooms and the museum field changed forever. It was the first place that visitors could play with science and art, to see, hear, smell and feel the world around them. It inspired similar institutions around the globe and became — as it has been acknowledged by its peers — the leader in the science center movement globally and the best science museum in the world,“ said Dr. Dennis Bartels, Executive Director of the Exploratorium. “Well, we are about to multiply our impact several-fold.”

Developed in two phases – starting with Pier 15 – this future nine-acre campus on the Embarcadero, a ten-minute walk from the Ferry Building, will unite the Exploratorium’s educational activities under one roof, as well as offer significant room for future expansion into Pier 17.

Construction in and around Pier 15 will provide 230,000 sq. ft for the Exploratorium as a destination for experiential learning and an R&D facility for creating innovative ways to teach and learn across the world. Outdoors, there will be over two acres of free public open space, some of which showcases new displays that combine the Exploratorium’s interactive exhibits with direct experience of the surrounding bay and city. Indoors, highlights include quintessential Exploratorium exhibits in four large galleries; space for professional teacher training; room for after-school programs, educational camps and lifelong learning; a theater; the Exploratorium store; and a café. The Observatory Building, the only completely new construction on the piers, will stand at the eastern end of Pier 15. It is a mostly glass structure – conceived like an aperture – through which spectacular views of the bay will complement a new gallery, outdoor terrace and a bayside restaurant.

In addition to the historic rehabilitation of Pier 15, the asphalt parking lot between Piers 15 and 17 will be removed. This will provide a civic space on the Embarcadero, with the newly exposed bay taking center stage down the middle between the two piers – open water traversed by two pedestrian bridges. For the first time in decades the public will have significant opportunities to visit the waterfront around Pier 15.

Designed by San Francisco-based EHDD Architecture, a leader in sustainable design, the new Exploratorium will be green inside and out. Taking advantage of the piers’ location on the Bay, the project will offset as much energy as possible with a 1.4 megawatt photovoltaic array on the roof, an innovative bay water heating and cooling system, and other components that contribute to the Exploratorium’s goal of being a LEED Gold, net zero energy facility, perhaps the largest, net-zero energy museum of its size in the world.”