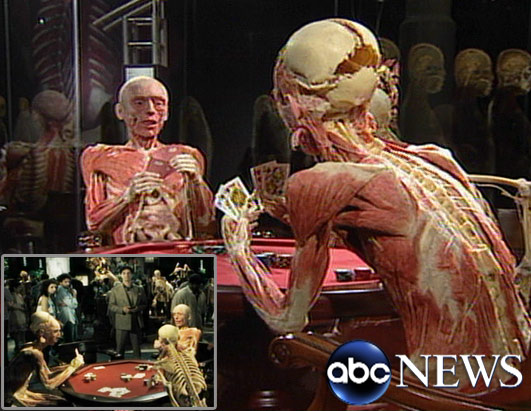 In 2006, a set of plastinated bodies, designed by plastination inventor Gunther von Hagens, was featured in the James Bond film “Casino Royale”  The plasticized remains of three human beings were posed playing poker, all at the request of the film’s producers. (ABC News)

Hawaii has become the first state to officially ban exhibitions of human bodies for profit, shutting down the popular “BODIES…the Exhibition” show that displays “unclaimed” bodies from China.

Lawmakers in the island state said the possibility of profiting off executed prisoners from China would not be tolerated in a state where many residents come from Asian backgrounds.

Premier Exhibitions, the publicly traded Atlanta-based company that puts on the show, has made millions of dollars from “BODIES” exhibits across the country, in Europe and in Asia.

State Rep. Marcus Oshiro, Chair of the House Committee on Finance, said he introduced his state’s legislation after watching the ABC News 20/20 probe into the origins of the bodies.

The 2008 report uncovered a thriving black market in human bodies in China and a self-admitted dealer in the bodies black market who described “body runs” to a location where bodies, including those of executed prisoners, were sold for $200 to $300.

“I never thought the show would come to Hawaii and when it did I decided Hawaiians would not tolerate the exhibition of these bodies for commercial profit. These people could be executed prisoners,” Oshiro said.

“Hawaii has a large population of people with an Asian background so that hits very close to home,” he added.

Oshiro said that Hawaii’s main historical museum does exhibit the sacred bones of native Hawaiians, and there are provisions in the state bill that allow for that exhibition to continue.

Some critics of the bill say that there is no difference between the display of those ancient remains and the plastinated Chinese bodies.

“I visited the exhibit. I learned something,” wrote one blogger under the name “Publius808” in support of the exhibition in Hawaii. “If the allegations are true that these bodies were used without permission, then that’s terrible. But this law is banal and sophomoric putting personal bias over science and art.”

Where Do the Human Bodies Come From?

But school officials told 20/20 it was “not true” that the school provides bodies for display in the U.S. Instead, the report found the bodies were provided by a private company run by a professor from the medical university which initially supplied the bodies but had pulled out because of bad publicity.

In the wake of the 20/20 report, New York Attorney General Andrew Cuomo launched a probe into the company’s practices. Premier settled with Cuomo’s office in May 2008, and the terms of the settlement required the company to prove that any new bodies on display were from consenting individuals.

Premier was forced to post a sign at its New York exhibit and state clearly on its website that it cannot disprove the allegations that bodies on display come from executed prisoners. The company is also required to refund tickets of customers who would not have seen the show if they had known what was going on behind the scenes. Cuomo also requires that the company be monitored by an independent entity for two years to ensure that the new business practices are enacted.

The company said it “must rely on the affirmations of its Chinese supplier” that the specimens do not come from the remains of executed prisoners.

The company’s CEO Arnie Geller told ABC News 20/20 in February 2008 that he was “appalled” at the allegations that some of the bodies from his Chinese suppliers might be those of executed prisoners. He said his own medical staff had seen no such evidence and that his suppliers have assured him that “these are all legitimate, unclaimed bodies that have gone through Dalian Medical University.”

“If these can actually be attributed to even the people that we’re doing business with, we would have to do something about that immediately,” Geller said.

Lawmakers in Some States Want Answers

Lawmakers in California and Pennsylvania last year introduced bills to require proof that the individuals on display had given their consent, but the governors in those states did not sign them into law. Florida has introduced a bill this year.

Even Congress introduced a bill that could have shut down the show following the 20/20 report. Rep. Todd Akin (R-Missouri) introduced the bill along with 21 co-sponsors to ban Chinese bodies from coming into the U.S., but it was never signed into law.

Brian Wainger, general counsel for Premier, declined to comment on this story.