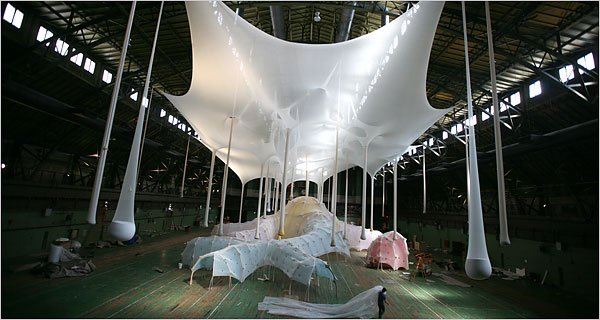 An installation by the Brazilian artist Ernesto Neto comes to life in the vast drill hall of the Park Avenue Armory. It opens on Thursday and runs through June 14. More Photos >

The Park Avenue Armory was built as the epitome of Manhattan masculinity, a Gilded Age boys’ club for its wealthy regiment, an imposing palace of oak paneling, ironwork and ornamental armor under the majestic gaze of many a stuffed moose head.

So there is a whole category of adjectives not often seen in the vicinity of its name, words like curvaceous, diaphanous, voluptuous, lissome. Or, of course, fleshy, glandular, uvular, uterine.

But over the past several days inside the armory’s vast drill hall, one of the largest unobstructed spaces in the city, the Brazilian artist Ernesto Neto has been hard at work with a small crew of riggers and needle-and-thread-wielding helpers building a sprawling version of one of his signature biomorphic sculptures that requires all of those words and a few more to describe adequately.

Made of hundreds of yards of stretched Lycra tulle, it looks something like a superfine spider web, laden with egg sacks, that has drifted down onto the skeleton of a forgotten species of dinosaur shaped like a cephalopod.

On Thursday it will open to visitors, who are invited for the next month to look at it, walk through it, touch it, lie down in it, even smell it. And to size it up as the first work of art to be commissioned solely by the conservancy that took over the long-neglected armory in 2006 and is seeking to remake it into the kind of raw, urban, big-art destination that is represented in London by the Turbine Hall at Tate Modern or in Paris by the Palais de Tokyo.

Rebecca Robertson, the armory’s president and chief executive, said that the selection of Mr. Neto, whose work is crowd-pleasing but also uncanny and almost unknown to American public-art audiences, was intended to begin defining the institution’s identity, after earlier collaborations with art organizations like Creative Time and the Art Production Fund.

“The guiding thought is that this shouldn’t be a mausoleum,” Ms. Robertson said last Wednesday. “It should be a really dynamic space where you never know what to expect.”

As if by way of illustration, at that moment carpenters were swarming around the drill hall, racing to dismantle the booths of the annual International Fine Art Fair, while in a room off to the side Mr. Neto and his workers were carefully rolling up the long Lycra socks that would soon hang down from the hall’s barrel-vaulted ceiling like stalactites.

Two days earlier bags and boxes of ground spices — cumin, black pepper, ginger, cloves and turmeric, 1,650 pounds’ worth — had arrived, to be sifted into the bottoms of these socks so that when they were suspended, the weight would stretch them, and the spices would stain the tulle, giving it a kind of corporeal mottle. Within a few hours after the spice operation got under way, the entire drill hall began to smell like a hot curry.

Ms. Robertson said that when Mr. Neto, 44, came to New York from his home in Rio de Janeiro last year to get a sense of the drill hall’s 55,000 square feet, he first saw it at night after a boozy dinner and he walked to the middle of its old pine floor — once used for tennis, with green paint and baselines still visible — and lay down, spread-eagle.

Over the course of several long days last week as the sculpture began to take form, he could often be seen pirouetting and striking gymnastic poses as he explained how it should look. While its design relies heavily on computers and engineering calculations, sewing machines and long, blunt needles were the most frequently employed tools in the drill hall.

“You really have to use your whole body to make this work,” said Mr. Neto, who has titled the installation “anthropodino,” perhaps to suggest a sort of late-surrealist rejoinder to the American Museum of Natural History on the other side of Central Park. “It is a sculpture that begins in one form and takes another and another and then a last form, and in between is a kind of dance.”

Tom Eccles, the executive director of the Center for Curatorial Studies at Bard College, who serves as an art adviser to the armory and is the installation’s curator, said that the challenge of making art there, in addition to competing with the history of the place, is the sheer size.

“The drill hall is kind of awe-inspiring and terrifying at the same time for an artist,” he said. “In a way, you have to be spectacular but without making it seem like just a spectacle.”

There were a few nail-biting moments during the construction. A rip appeared in part of the Lycra canopy stretched tightly from the hall’s trusses. A few of the precision-cut plywood “bones” that make up the archaeological-looking ground structure didn’t fit together. Mr. Neto, who said he had recently re-watched Fellini’s “8 ½,” at times resembled the besieged director played by Marcello Mastroianni, moving from one swirl of concern to the next.

But more often, he seemed to revel in the chaos and relax in direction proportion to its intensity. On Thursday as a young clothing designer, Hannah Fallon, hunched beneath an expanse of filament-like fabric with a sewing machine to fix a flaw — “I felt like a silkworm,” she said — Mr. Neto stretched himself out in front of her to watch, lying on his side like a wild-haired Brazilian odalisque.

Around him nearly everyone, including the riggers, walked around in stocking feet to keep from damaging the tulle. And despite the presence of hydraulic lifts and trucks, the whole thing began to take on the feel of a pajama party. (It is no coincidence that a Google image search for “Lycra tulle” turns up mostly pictures of nighties or of Mr. Neto’s work.)

By Monday afternoon, energy was flagging, and Mr. Neto himself was getting a bit slap-happy, approaching a group of dozing workers and trying to rally them by doing a little samba: “So this thing goes here.” (Hip shake.) “And then this other thing goes there.” (Hip shake.)

Behind him the sculpture was nearly finished, rendering the drill hall almost unrecognizable. As painstakingly as he had planned it, Mr. Neto said, it still seemed like something that had generated itself.

“In the end,” he said, “there’s a way these pieces express themselves that is beyond the rationality of the design I make. You know, man? I just sit back and watch it come to life.”

Toggle the Widgetbar
Translate »
We use cookies to analyze site performance and usage. By Clicking "OK" or by clicking into any content on this site, you agree to allow cookies to be placed. To find out more visit our privacy policy.OkPrivacy policy