SOME 150 yoga fanatics, mats in hand, gathered in the second-floor atrium of the Museum of Modern Art one recent Saturday morning. They were there to “Put the oM in MoMA,” as the invitation read. 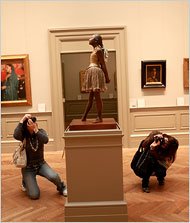 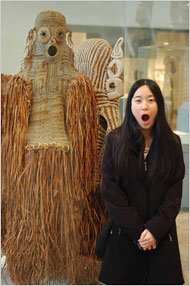 A photo from the “It’s Time We Met” campaign, chosen from thousands taken by Met museumgoers.

Assembled in a circle, the group practiced poses while on the walls surrounding them flowed giant images of budding tulips, slithering worms and a pig in a verdant meadow biting into a juicy apple, all part of the Swiss artist Pipilotti Rist’s monumental video installation “Pour Your Body Out (7354 Cubic Meters).” The free 75-minute class was such a success that there is talk of holding another in the museum’s sculpture garden.

“In these difficult times we want to hit as many buttons as we can,” said Glenn D. Lowry, director of the museum. “We’re doing everything possible to connect with people.”

So is the Hammer Museum, part of the University of California, Los Angeles. The artist Lisa Anne Auerbach has organized a bike night at the museum for April 16, during which bicyclists can ride into its courtyard.

“We will have valet parking for the bikes,” said the museum’s director, Ann Philbin. “In a city like Los Angeles, people are finding excuses to get together without going to expensive restaurants.” The gathering will include cocktails and a screening of the movie “Breaking Away.”

Yoga classes and bicycle get-togethers may not be your typical museum fare, but in these rough economic times, anything goes.

The downturn has hit museums hard, with plummeting endowments, dwindling donations, fewer tourists and the decline of the corporate museum party, once a steady revenue stream. Museums have been forced to freeze hiring or lay off staff members, close satellite shops and make other cutbacks.

But lean times are bringing out a pioneering spirit as museum officials strive to develop creative strategies for what is undeniably a new world.

“This is a good moment to refocus and reinvigorate,” said Thomas P. Campbell, who took over the helm from the legendary director Philippe de Montebello at the Metropolitan Museum of Art in January. “We want people to know we’re here and have been for 138 years. We’re a place of infinite experiences. Last year there were something like 20,000 different events from lectures to tours. A tour leaves every 15 minutes. It’s really quite phenomenal.”

Beneath all the upbeat talk lies the same kind of fear and uncertainty that is being felt throughout the business world. As reports of layoffs and budget cuts stream in from museums across the country, directors are struggling to do more with less. To reach new and bigger audiences, many are revamping their presence on the Web or trying new forms of marketing.

Most, if not all, are also expanding their public programs. More than before, institutions big and small have adopted the same mission: to transform once-hushed museums into vibrant cultural centers where the activities go far beyond what’s hanging on the walls.

“We can’t just be about art anymore,” Ms. Philbin said. “Museums are the new community centers.”

Whether visitors come to see a movie or listen to poetry, take in an art exhibition or attend a lecture, it doesn’t matter as long as they come.

“The better we are at serving our audiences, the more we will be appreciated,” Ms. Philbin said. “And people will want to give us money.”

With falling tourism, some of the larger (and richer) museums are starting ambitious advertising campaigns aimed at local — and younger — audiences. In New York, for example, both the Museum of Modern Art and the Metropolitan Museum of Art are delivering not-so-subtle messages about their permanent collections.

A billboard near Times Square shows a couple kissing in front of Rodin’s sculpture “Eternal Spring,” accompanied by the tag line “It’s Time We Met.” The photograph, taken by Laura P. Russell of her parents, Gene and Cindy, is one of about a dozen being used in the marketing campaign. They were chosen from thousands of snapshots taken by Met visitors with works of art at the museum and posted on the photo-sharing site Flickr.

Each ad carries the name of the photographer (who will be paid $250 per photograph and receive a one-year membership to the museum), and the date and time the photograph was taken. “In the 19th century people would make a sketch in the galleries,” Mr. Campbell said. “Now they take pictures and upload them.”

The campaign is splashed on the sides of Manhattan buses, in the subways, on train platforms, on Web sites and even on the construction fence outside the museum’s Fifth Avenue entrance.

“For years our advertising was focused around special exhibitions,” Mr. Campbell said. “But in this time of gloom and doom we want to show people we’re a haven, a place to explore, discover and find inspiration.” 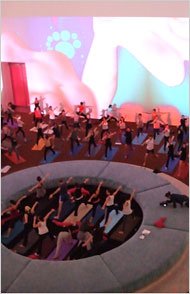 STRETCH A yoga class at MoMA surrounded by a video installation by the Swiss artist Pipilotti Rist.

In a campaign that ended this month, the Museum of Modern Art plastered a Brooklyn subway station with reproductions of 58 works from the museum’s permanent collection. The Atlantic Avenue-Pacific Street station’s tiled walls and columns and even the arms of the turnstiles were covered with images of iconic works in the MoMA collection, including Warhol’s Campbell’s Soup cans, Monet’s waterlilies and Duchamp’s bicycle wheel. The campaign, which was seen by an estimated 50,000 commuters a day, was intended to remind New Yorkers of the riches that make up the museum’s holdings.

With costly blockbusters on the wane, in fact, promoting permanent collections has become a priority. Last year, MoMA mounted two shows centered on important paintings in its collection, and the museum has plans for a similar effort in September — an exhibition based on the Monet waterlilies.

The Walker Art Center in Minneapolis is in the middle of a major reinstallation of its permanent collections. Plans include rotating it as often as three or four times a year. “Our permanent collection has not been as visible as it should be,” said the center’s director, Olga Viso. She also will invite artists to create a work of art using something in the collection as inspiration. “The point is to show that our collection is a living and dynamic resource that we draw from,” Ms. Viso said.

Making the Art Institute of Chicago the cultural hub of the city is the No. 1 priority for James Cuno, its director, as he gears up for the opening of its new modern wing on May 16. Designed by the Italian architect Renzo Piano, the 264,000-square-foot space will house the institute’s 20th- and 21st-century art collection. Its exhibitions, lectures and educational programs will include local partners like the Lyric Opera of Chicago and the Goodman Theater.

“Each exhibition has a set of lectures, poetry readings and a chamber music series that relate to one another,” Mr. Cuno said. “We are also reaching out to graduate programs in the city with a series of influential art historians and professors that will be lecturing for students as part of the curriculum.”

It is also holding free lunchtime concerts planned in cooperation with consulates including Spain, China, India, Germany, Croatia, South Korea and Poland, and readings by international poets. “We want to get repeat visitors and build up a sustained relationship to the community,” Mr. Cuno said.

In Los Angeles, Michael Govan, director of the Los Angeles County Museum of Art, is gearing programs to local communities. In June, for example, the museum is presenting Twelve Contemporary Artists From Korea as a way of appealing to the city’s large Korean population.

Some institutions are also using the Internet to give an exhibition an added dimension. At the Walker, for example, a traveling show called “Worlds Away: New Suburban Landscapes” has its own Web site, which includes a lexicon of terms related to suburbia. Visitors can add their own terms and can also post their personal suburban stories on YouTube, 16 of which were included in the show when it was on view at the Walker last summer. (The exhibition, which was also at the Carnegie Institute in Pittsburgh last fall, opened at the Yale School of Architecture on March 2.) It’s just one example of many ways the Walker is trying to “merge on-site with online,” as Ms. Viso explains it.

The Art Institute’s Web site even has an online book club where curators select readings related to exhibitions and create downloadable discussion guides. There are also interactive components including curator-led discussion groups and readings at the museum. Since it began a year ago it has attracted nearly 700 members.

The Hammer’s new site has a podcasting component that has already caught on. “It makes us international,” Ms. Philbin said. This month the Museum of Modern Art rolled out a new version of moma.org that is not only more viewer friendly but more communicative, too. Highlighted on the site are blogs as well as links to places like Flickr and Twitter.

Some efforts to increase visitorship are decidedly less high-tech. To capture more New Yorkers, the Museum of Modern Art has decided to add a second late night. In addition to staying open until 8 on Fridays, it will be open till 8:45 on one Monday a month. “This is targeted for local people who want to be able to go to the museum on their way home from work,” said Mr. Lowry, the director.

The Walker Art Center is planning a first this summer: to be open on July 4, with a selection of free programs that are family focused. “Typically we’re closed that day,” Ms. Viso said. “But we recognize that many people will not be traveling this year.”