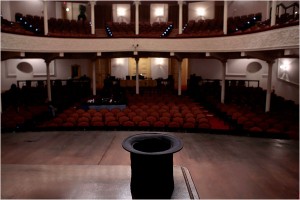 
“Lincoln’s presence may hover over Washington, but there is no museum dedicated to him. Right now, the working theater is a kind of living museum, its shrine overlooking the stage, no matter what play is performed.”

WASHINGTON — Museums are increasingly becoming like theaters, their once-staid display cases giving way to extended narratives and elaborate special effects. But now, after nearly two years of renovations, a theater has become more fully a museum. It is being incorporated into an expanding multibuilding exhibition that will recount a tale as resonant and dramatic as any ever staged: Lincoln’s presidency and assassination.

In February Ford’s Theater, where the murder took place on April 14, 1865, reopened as a fully functioning theater doubling as a memorial exhibit. The presidential box where Lincoln sat with his wife, Mary, watching a comic play as John Wilkes Booth put a bullet through his skull overlooks the stage and has itself become a permanent set, draped with flags and decorated as it was that evening.

On Wednesday a 7,000-square-foot exhibition space opens — Ford’s Theater Museum — through which visitors will proceed before emerging into the theater itself. Before the extensive renovation the museum simply displayed the extraordinary collection of objects belonging to the National Park Service, which is a partner with Ford’s Theater Society in the enterprise.

Many of these objects have been so well preserved because they were evidence in a murder investigation: the guns and knives belonging to the conspirators, Booth’s diary and confession written as he was on the run, his thigh-high boot, slashed open by a doctor (his name was, yes, Mudd) treating the leg that the assassin injured leaping to the stage from the president’s box.

But as the museum’s director, Paul R. Tetreault, explained, traditional displays could do little to explain the significance of these objects, the events they reflected or the achievements that made the killing such a trauma. They presumed an understanding but did not create it. So in consultation with the historian Richard Norton Smith, a $3.5 million transformation of the museum has taken place, leading the visitor though a historical journey.

The exhibition, below the theater, opens with an image of the train that brought Lincoln to Washington for his inauguration in 1860 and then presents a deft history of the Civil War and Lincoln’s life in the White House. It ends in a hallway in which parallel walls chronicle the activities of April 14 for Booth and Lincoln, before they came together in the theater to which the hall leads.

After a guided tour of the theater by a park ranger, visitors then cross the street, just as Lincoln’s injured body did that night, to enter the Petersen House, another part of this museum complex, in which historically costumed park rangers give an account of the events of Lincoln’s final night in the cramped back room.

In 2010, Mr. Tetreault says, construction will begin to transform the building next to the Petersen House into the Center for Education and Leadership; it will include resources for teachers, but also exhibitions that will examine the aftermath of the assassination and Lincoln’s legacy.

So the opening of this museum in Ford’s Theater provides the framing of an ambitious narrative, in which these two primal sites provide the focus. There is much stagecraft in this, of course. Even the theater, for all its impact on visitors, is mostly a re-creation: in the 19th century it was gutted to create a government office building that was later damaged in a structural collapse. But the care taken during the theater’s first major restoration during the 1960s and the attentiveness of its latest revision reincarnate the historical aura.

The museum space, the newest addition to this multibuilding project, is also strong and is designed to attract a wide cross section of the million or so annual visitors now expected at the site (300,000 came just to see the theater since its recent reopening).

It begins with a light touch: the first image we have of Lincoln shows an unrecognizable life-size figure draped in a military cloak and wearing a “Scotch plaid cap” — just as a New York Times reporter mistakenly described him — trying to stymie any assassination attempts as he entered Washington for his inauguration. (The description, we are told, “had no basis in fact” — though that didn’t prevent the exhibition from tapping into the myth.) But the brass knuckles and goggles in a display case really were given to Lincoln by his bodyguard; apparently they were never used.

Then, keeping the wry tone, displays describe the conditions of 1861 Washington — the malarial Potomac Flats, the open sewer running along what became Constitution Avenue, the “marble stump” of the Washington Monument, abandoned for lack of money. We then see a gathering of life-size statuary, pompous, preening and supplicating, a representative “swarm of office seekers” who crowded the new president’s schedule. Information about Lincoln’s Cabinet is presented in files, displayed in a … cabinet.

But matters turn somber soon enough: we learn a bit about the tensions between North and South and the events at Fort Sumter and get a compact history of what the exhibition calls “The Improvised War” — at least during its first years. One display features the roster of military leaders Lincoln dismissed before Ulysses S. Grant was able to draw the war to its conclusion. Another reproduces the view that Lincoln might have had from the Oval Office as a video recounts the layers of decision and conflict that made the middle of the war so terrible.

“If there is a worse place than hell,” Lincoln is quoted as saying after the defeat at Fredericksburg, Va., “I am in it.”

And along the way there are glimpses of domestic life (and tragedy) at the White House as well as a defense of Mary’s Todd Lincoln’s enormous home-decorating expenditures that points out what a sorry state the presidential residence was actually in when the couple arrived. Another series of displays compactly reviews Lincoln’s steadily evolving views on slavery (and includes a video about his encounters with Frederick Douglass).

This is a lot to cover in a small space, and there are times when ambition would have been greater fulfilled if it had been more moderated; as it is, the latter years of the war become a bit muddled in the viewer’s mind. And though there is an account of the contention in the North about the Civil War in a display about the 1864 presidential campaign (along with some sheet music for a campaign song I’d very much like to hear: “Abraham the Great and General Grant His Mate”), we are not fully prepared for the intensity of hatred and resentment of the conspirators. They are given their own separate space in the exhibition that is meant to evoke the boarding house of Mary Surratt, at which they met.

Here, life-size figures of the plotters stand ominously about as a display case shows relics of the assassination and the thwarted escape, including the revolver used by Lewis Powell during his attempt to kill Secretary of State William Henry Seward, Dr. Samuel Mudd’s medical kit and the compass that the fugitive Booth misread, thus ensuring his eventual capture. Here, rather than providing too much narrative, the museum presents too little, particularly given the spectacular events that unfolded.

It may be that that chronicle is being left for the park rangers to outline in the Petersen House, as they did on my visit there. And perhaps, too, it would be too jarring suddenly to walk into the theater where the assassination took place, after one had already been led to its aftermath.

These are also matters of emphasis, and when, a few years hence, the last act of this museum drama is completed, the plotting may be more meticulously worked out. In the meantime the museum provides a lively and vigorous survey. In its last display case, the original door to the president’s box is shown, along with the pine bar Booth used to jam it shut — objects that become creepier once you’ve seen the place where it all happened.