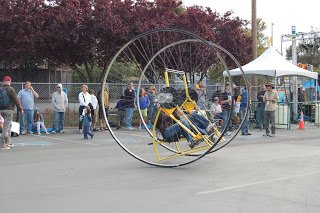 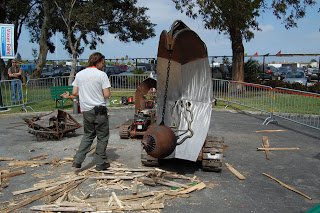 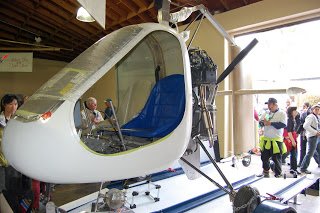 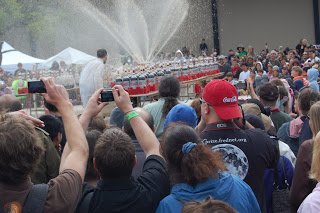 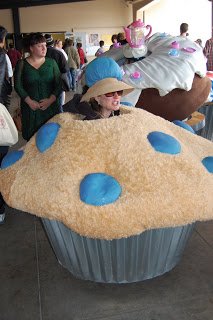 More than 20,000 people at Maker Faire, hope you made it. See post below from CNET

SAN MATEO, Calif.–If the hour-long traffic jam leading into Maker Faire wasn’t proof that the do-it-yourself festival being held here all weekend is bigger than ever, then maybe the huge crowds gathered around attraction after attraction was.

This is the third year that Maker Faire has packed the San Mateo Fairgrounds with the best and brightest of the burgeoning DIY community–mobile barcalougers, dueling Tesla coils, huge Burning Man art pieces, felt masterpieces, and on and on–and there can be little doubt the success of the previous two years’ iterations led to a bigger crowd this time around.
Click for gallery

In 2006, the first Maker Faire was a bit of an oddity, yet still attracted 20,000 people for the weekend. Last year, that number doubled and while I didn’t hear any attendance figures for this year, I did overhear someone saying that ticket pre-sales had doubled over last year’s total. All this is just the math behind the wall-to-wall people moving around the fairgrounds–most of them sporting ear-to-ear grins.

At Maker Faire 2008, there was a very large contingent of steampunk vehicles, structures and clothing. Here, a steampunk vehicle resembling a tractor powers its way across the pavement of the San Mateo Fairgrounds in San Mateo, Calif., where the do-it-yourself festival is being held all weekend.

For me, and many others who have been to the previous Maker Faires, this weekend’s version was more like a reunion than a showcase of new projects. To be sure, there was an endless supply of new makers on hand. How could there not be with hall after hall of creative people showing off the talents, skills, and wicked good humor that is the hallmark of events like this.

But, there was also a lot on display that had been at previous Maker Faires–and other events, too, like Burning Man, Yuri’s Night, Coachella, and so forth. These days, a lot of big interactive art pieces are making the rounds of such festivals and events and some of the artists behind them, people like Michael Christian, Dan Das Mann and Karen Cusolito, Mark Perez, and others, are becoming known beyond the relatively insular communities they began in.

But, let’s be honest: None of that matters when what you see when wandering around Maker Faire is excited kids, happy parents and young, attractive men and women dressed to the nines in period costumery.

One of the first things that one would see when entering Maker Fair was Kevin Mathieu’s LegoJEEP. The car was meant for covering with Lego bricks, and it was a huge hit with kids. However, Maker Faire security was not too happy to see children climbing on top of the vehicle, but in the spirit of the event, after security voiced its concerns, Mathieu restricted kids to standing on the ground or on the bumper. The car and the resolution to security’s issues with it, were emblematic of the do-it-yourself ethos and the desire of its participants to solve problems themselves.

And that is really the message that Maker Faire sends: That there are delights for everyone, whether you’re a robotics fanatic, a Lego fan, a crafting devotee, a fire artist, a 9-year-old, or all of the above.

Those of us who live in the Bay Area might be tempted to think that this is the only place on Earth where you could find such an eclectic combination of people. Yet, as the very successful Maker Faire Austin last fall demonstrated, there are such folks in many places. What’s really needed to bring them out of the woodwork is an event that champions their creativity, glee, and interest that people of all kinds get from hours and hours of playing around with the kinds of things that Maker Faire offers.

Colin Fahrion poses for a picture wearing a whimsical steampunk-esque bunny mask and ears. The outfit was emblematic of a popular aesthetic at Maker Faire this year.

One wonderful project was the Buscycle, a fully pedal-powered bus of sorts. You’d see it rolling by all over the fairgrounds, a happy collection of children and adults thrashing their feet, driving it forward. I had seen it sitting idly on Thursday when I visited the fairgrounds for Maker Day–a day for the makers to meet each other and get a bit of a taste for the event before they had to entertain the multitudes–and I’d wondered if it would be special. Question answered: Yes.

Another terrific–and very popular–attraction was the remote-control scale battleship naval wars that were being put on by members of the Western Warship Combat Club. In front of hundreds of people lined up four-deep or standing up on bleachers, these folks ran their little warships around a makeshift pool, firing BBs from ship to ship, trying to sink them. Little ships would get damaged, and then, showing no mercy, those running much bigger vessels would ram their craft into the smaller ones, all to the gasps and “Oohhhs” of the crowd.

There were hourly demonstrations of dueling Tesla coils that, with dimmed lights for full dramatic effect, would build up to a crescendo of commingled lightning bolts crackling away in front of an audience lucky enough to have wandered by at the right time.

In one outdoor area, the Neverwas Haul was attracting a long line of people wanting to climb inside a fully steam-powered, mobile, Victorian house. If that’s a concept that boggles the mind, don’t let it: A mobile Victorian house is exactly the kind of disconnect that Maker Faire is all about.

That’s why, for example, Mark Perez’s gigantic, Life-Size Mousetrap was a massive hit this weekend, with hundreds of people lining up to watch and see if a bowling ball could make it all the way around a long path of levels, pulleys, ramps, baskets, ladders, and the like. I never actually managed to see it running because the crowds were too deep. But when I’ve seen it in place previously, at Maker Faires here and in Austin, and at Burning Man, it’s been a thrill to watch it in action.

A fire art project called 2piR tasked people standing on a platform in the middle of a circle of propane-fueled jets to move around and set the jets off with large plumes of fire. The more they moved, the faster the jets would shoot.

What else? Well, no story could do the event full justice. But the sublime 2piR was well worth highlighting. This is a fire art piece in which a large circle of propane tanks connected to jets shoots out plumes of fire in time with the movements of people standing on a platform in the middle. The more you move, the more the jets of fire erupt on the perimeter. As the day grew cold Saturday, many people huddled on the outside of that perimeter, hoping that the players in the middle would cause the plumes to erupt near them and warm them up. Sadly for me and my friends, the propane fueling the jet nearest us was empty.

Several people were on hand at Maker Faire demonstrating what’s possible with aerial kite photography, a technique in which a digital camera is harnessed and hung from a kite and then raised to shoot pictures of the ground below.

Earlier in the day, I had wandered through the various halls and came across a terrific exhibit of aerial kite photography. An artist named Ben Peoples explained that a small camera suspended from a harness under a kite can be controlled with precise movements and with some practice, can be used to take excellent photos from high above the ground. And indeed, there was a series of the photos on display, and you would never know from looking at them that they weren’t taken by a professional with a camera in hand, maybe inside a helicopter or a plane.

Another project I liked was Michael Yates’ “Camp Rehab Chevy,” a collaborative effort to rebuild a very worn down 1948 Chevy truck and bring it back to life. As I found it, it was still pretty beat up and sad, but a group of people were tinkering around in the engine and inside the cab, and I had no doubt that by weekend’s end, this might well be a functional truck.

The point of all this is that Maker Faire is a place where there is almost literally no end of wondrous attractions and terrific little finds. Tucked away in a corner of a hall, you might find some little delight that you’d never think you’d find: someone with a series of LEDs being spun around in seemingly random circles, making gorgeous patterns in the air, like Carl Pisaturo’s “Rotating Amusement Device,” or Tim Giugni’s “Shadow Dome,” a terrific exhibit which projected a shadow castle on the wall of a canvas room with a spotlight inside.

It’s not likely that if you’re reading this story that you’d be able to hop in the car and make it to the fairgrounds before Maker Faire closes Sunday–at 6 p.m.–but if what you’re reading here piques your interest and you’ve never been before, mark the first weekend of May 2009 on your calendar and make a point of coming down next year. You will not be disappointed.