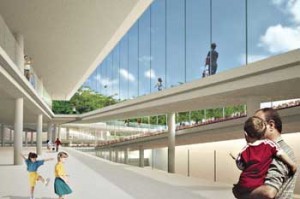 A moribund economy now may have a better chance of blocking the project than lawsuits by parks activists and neighborhood opponents. Fundraising has foundered while projected costs have climbed by tens of millions to $150 million or more, Crain’s has learned. Sources close to the project say odds now are 50-50 at best that the Grant Park plan will proceed.

Hinz pulled the group’s last income tax report from the attorney general’s office and found the museum had “$28.1 million in “pledges receivable” as of June 30, 2008—just $1 million more than it did a year earlier.”
And broader trends in construction projects are not helping either: Hinz reports that the project is now said to cost anywhere from $115 million to $175 million, up from $85 million.
The museum released this statement about the story to Tribune architecture critic Blair Kamin, as reported on Kamin’s blog:

Chicago Children’s Museum is moving forward with the plan to relocate to Daley Bicentennial Plaza in Grant Park. There is no news to report in that regard. Greg Hinz’s piece in Crain’s Chicago Business relies only on unnamed sources, and should be viewed with extreme skepticism.

Which brought this response by Hinz on his blog:

The statement says the project is “moving forward” — the same thing the museum told me without indicating where it will get the money.
The statement doesn’t deny that the price is up tens of millions of dollars a year, or that it’s talking with McPier about extending its lease at Navy Pier, key points of the above.
And while the statement correctly notes that I talked to unnamed sources, it neglects to note that one of those “unnamed sources” was its own income tax return, which shows that, even a year ago, fundraising for the museum was minimal.
The museum can clear up all of this if it begins answering a few questions. Like how much building the Grant Park facility now is projected to
cost. Or what it wants from McPier. And how much funding it has committed in the past couple of years.

Here’s the statement the children’s museum sent me:

Chicago Children’s Museum is moving forward with our plan to relocate to Daley Bicentennial Plaza in Grant Park. We are confident that we have made substantial progress, and that our donors, supporters and the community remain engaged, enthusiastic and wholly committed to Chicago Children’s Museum. We have never felt better about the quality of our educational programs, exhibits and community partnerships. Along with our partners, we are creating a world-class museum in the center of the city that’s accessible to all of Chicago’s children and families. Any reports that the project is in peril are erroneous.

Asked about the change between statements, Natalie Kreiger, spokeswoman for the museum, wrote an e-mail that “The statement I sent you more adequately addresses the project and museum as a whole.””