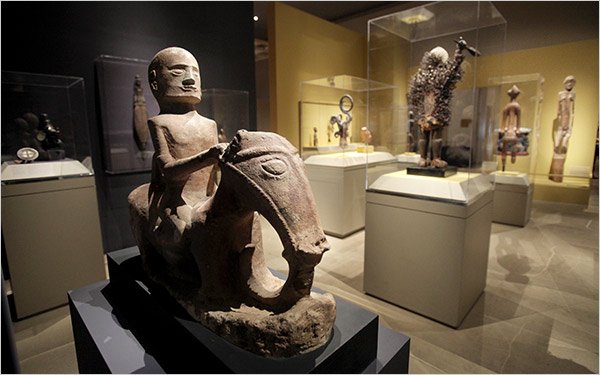 Equestrian Figure: Portrait of a Chief,” foreground, from Sumatra, Indonesia

EXHIBITION REVIEW “African and Oceanic Art From the Barbier-Mueller Museum, Geneva: A Legacy of Collecting” at the Metropolitan Museum of Art through Sept. 27, 2009

In the Michael C. Rockefeller Wing at the Metropolitan Museum you’ll find a tiny African copper relief that probably predates, and would surely have awed, the great Lorenzo Ghiberti. You’ll encounter a bust of a Nigerian beauty to rival Nefertiti; an Oceanic Apollo with the physique of an Olympian; and a Micronesian statuette that is, with its stacks of faceted planes, Brancusi before Brancusi.

These objects, along with 32 others, make up the exhibition called “African and Oceanic Art From the Barbier-Mueller Museum, Geneva: A Legacy of Collecting.” The show, an unabashed masterpiece display, is not only a gold mine of historical data and a connoisseur’s delight, but also a reminder of how perceptions evolve — a mere few decades ago everything here was referred to as “primitive art.”

This was a capacious category. It covered African, Oceanic and North American Indian material, as well as Pre-Columbian art from Central and South America and all things “tribal” from everywhere else. Only fairly recently have the political dimensions of “primitive” begun to be fully sorted out and reckoned with.

Meanwhile, long-established museum collections built on that catch-all concept are still with us, changed now in their thinking if not necessarily in their form.

The Barbier-Mueller Museum represents one such collection; the Rockefeller Wing, with origins in Nelson A. Rockefeller’s 1957 Museum of Primitive Art, another. At the Met the two converge, complementing and extending each other. In one sense the result is an old-fashioned sampler display of one-tribe-one-style sculptural types: a classic reliquary figure from Gabon; a textbook New Ireland mask; and so on.

At the same time, by bringing certain comparable pieces from two different collections together, the show is an invitation to alter our habits of looking. We are encouraged to retain a sense of the context and history of objects, but to pay more than usual attention to interpretive inventiveness and formal finesse: in short, to get a sense of the many things that “great” in art based on non-Western models can mean.

In the Barbier-Mueller exhibition that spectrum is wide and deep. The collection was started in the early 20th century by Josef Mueller (1887-1977), the son of a Swiss industrialist. A young man with a hankering for the vie de bohème, he moved to Paris in 1907. Not being an artist himself, he became a collector, buying Picassos hot from the studio, and in due course buying what Picasso was buying: African and Oceanic art.

He eventually moved back to the Swiss family home, filling its 18 rooms with Cézanne landscapes, Baule masks, Olmec sculptures and local folk carvings of a kind we would now call outsider art. In 1955 his daughter Monique married another collector, Jean Paul Barbier, and the two assumed responsibility for the collection, adding to it, documenting it and finally in 1977 establishing the museum that bears their name.

The Met show — organized by Alisa LaGamma, the museum’s curator of African art, and Eric Kjellgren, associate curator of Oceanic art, with Yaëlle Biro, a research assistant for African art — opens with one of the Barbier-Mueller’s treasures, a serpent dance headdress carved by a Baga artist in Guinea, West Africa, in the 19th or early 20th century. Seven feet tall, patterned with chevrons and diamonds, and shaped with gentle undulations, the piece was brought out for initiation rites and worn upright on a dancer’s head so that it towered over everything in a great rainbow curve.

This piece was one of a half-dozen collected by Europeans in Guinea in 1957, when the spread of Islam had put such sculptures out of favor. Another example from the group, and a remarkable variation on a fantastic theme, is in the Met collection and on permanent view in the Rockefeller Wing. In this case the serpent bends dramatically just below midpoint, as if its upper portion were swaying outward in space. The vertiginous impression it must have made while in motion is easy to imagine.

Two Senufo figures from Ivory Coast, one in the Swiss collection, the other in the Met’s, make another eye-training comparison, though here the immediately noticeable difference is in condition rather than concept. The female figure from the Barbier-Mueller, her braceleted arms poised so that her hands rest on her thighs, is in fabulous shape.

Her male counterpart at the Met, though marvelously carved, is time-worn, with one entire arm and the hand of the other missing. You have the sense, though, that even intact, he would be the less dominant figure. He is sleepy-serene. She is a self-possessed spark.

Such comparisons tell us things useful to know. They tell us that African art is not a fixed set of forms repeated verbatim, with particular forms assigned to particular locales. It is an art of specificity, individuality, fresh responses and nuanced invention, with images and ideas in constant transformation: try this, add that, take that away.

So intense and extensive is this dynamic that the very term “African art” is at some important level useless, if not misleading. While obviously less pejorative than “primitive art,” it similarly ignores the reality of thousands of separate traditions, belief systems and talents, not to mention the factors of time and change.

The same is at least as true of Oceanic Art, an omnibus term embracing unnumbered cultures spread across thousands of miles of the Pacific, from Asia to Australia to Antarctica. The installation for the Met show, skillfully designed by Michael Batista, places African objects against yellow backgrounds and Oceanic objects against slate-gray. But even without those visual guidelines, it is easy to distinguish between the two “primitivisms,” and to get a sense of the diversity within each.

The big Oceanic entries from the Barbier-Mueller really pack a wallop. They’re like a series of startling confrontations, from a scrunched-up gargoyle made for a Papua New Guinea roof; to a bark-cloth mask of ferocious fragility — it looks to be made of tissue and syringes — from the Bismarck Archipelago; to a larger-than-life wood mask from the Torres Strait Islands, with a Frankenstein forehead, human-hair dreadlocks and a smile that might be a snarl.

All of these images are unalike, and none share visual common denominators with others around them. A Sumatran stone figure of a magician-king seems to exist in a world of its own. So does a small wood female figure from the Carolina Islands composed entirely of proto-Modernist planes with a couple of nicks for navel and nose.

True, all of these objects, like their African counterparts, served a general function: in one way or another they were conceived as links between human and spiritual realms. But the exact mechanics of communication, the precise purpose to which it is put, and the identities of the powers to which it is directed — these are as various, mutable and mysterious as the art itself.

In short, the Met exhibition is both a lesson and a feast. The lesson is that the variety of beauty hidden in words like “primitive,” “non-Western,” African” and “Oceanic” is greater than we ever suspected and that we are beginning to realize this. As to the feast, the table is set in the Barbier-Mueller show and in the Rockefeller Wing galleries beyond. Like any fine meal, this one fills you up and leaves you wanting more.

“African and Oceanic Art From the Barbier-Mueller Museum, Geneva: A Legacy of Collecting” is at the Metropolitan Museum of Art through Sept. 27.