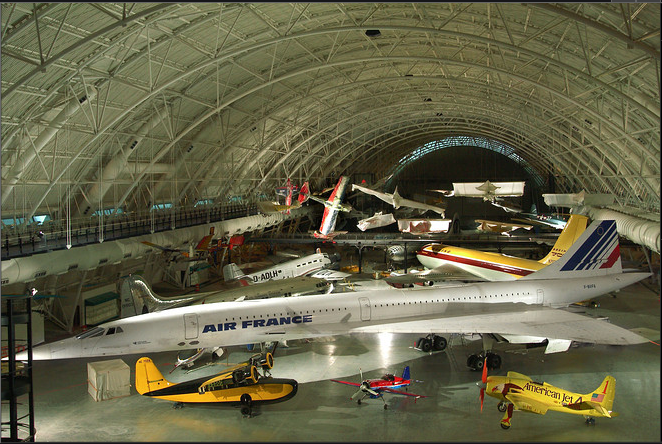 The Concorde and the Boeing Dash 80 are surrounded by smaller aircraft on the south end of the Boeing Aviation Hangar. Photo by, Carolyn Russo, NASM, Smithsonian Institute

“The nation’s most-visited exhibition space—the Smithsonian National Air & Space Museum on Washington’s Mall—plans a whole week of programs to mark next week’s 40th anniversary of man first setting foot on the moon. At the Smithsonian’s Steven F. Udvar-Hazy Center out by Dulles International Airport, meanwhile, not much is planned to remember the Apollo 11 mission.

But more certainly could be.

A small group on the daily “expert tour” here, for example, recently heard Smithsonian space-history curator Allan Needell recall one nearly forgotten aspect of the astronauts’ return to Earth: fears that micro-organisms on Neil Armstrong, Buzz Aldrin and Michael Collins might cause a global pandemic among their fellow earthlings. Standing by the original Mobile Quarantine Facility—a humble Airstream trailer in which the crew was isolated for 65 days after the July 24, 1969 Pacific splashdown—Mr. Needell described the caution surrounding President Richard Nixon’s trip to the carrier USS Hornet to greet America’s newest heroes. A photo showed the three men beaming at their commander-in-chief through a window in the rear of the trailer.

“Wouldn’t that have been something?” one tour-group member said to his children. “We send men to the moon and they come back and infect the president with moon germs.”

For all the history here, the Udvar-Hazy (pronounced OOD-var HAH-zee) is the Rodney Dangerfield of museums. Though more than twice the 141,000-square-foot size of the Smithsonian’s famous museum on the Mall—and drawing a million visitors annually to a collection that is nearly three times larger—the six-year-old center gets relatively little respect.

Air & Space downtown, you see, draws more than seven million visitors a year—second in the world to the Louvre in Paris. Among the Mall site’s 103 “large artifacts,” as the Smithsonian calls planes, rockets and the like, are such aviation icons as the original 1903 Wright Brothers Flyer, Charles Lindbergh’s Spirit of St. Louis, Amelia Earhart’s Lockheed Vega and the first aircraft to break the sound barrier, the Bell X-1. All of which, incidentally, appear in “Night at the Museum: Battle of the Smithsonian,” filmed in part at the Mall venue—giving it a cameo that could boost attendance as much as 20% this year. The Udvar-Hazy Center isn’t shown at all, even though its first-rate displays include a Lockheed SR-71 Blackbird spyplane—the world’s fastest jet airplane—and the space shuttle Enterprise. (The Udvar-Hazy may have the last laugh, however. It—and its SR-71s—did get a featured role in the “Transformers” sequel, which has turned out to be a box-office hit far surpassing “Night at the Museum.”)

“We’re one museum, two locations, although sometimes it doesn’t seem that way,” says F. Robert van der Linden, chairman of the Smithsonian National Air & Space Museum, and between them “we have about all the great gems in aircraft and spacecraft.” From the day the Mall building opened in 1976, the Smithsonian envisioned a second venue—and hoped it would be out by Dulles, where aviation access would be easier. Numerous U.S. sites wanted Congress to crown them with “a second Smithsonian,” he says. So to discourage such competition, the new venue was officially dubbed an “open-storage” facility, a label that still stings some staffers at the Udvar-Hazy.

But to visitors, this expansive facility looks like anything but open storage.

From the “overlook” on the second level, just inside the main entrance, the immediate impression is of the massive, futuristic SR-71, with the even-larger Enterprise—a trainer that never flew in space—appearing to be on the Blackbird’s tail. (The Enterprise actually dominates the enormous “space hangar” that extends from the main area.) A glance to the left summons other giants of aviation, including the Boeing B-29 Superfortress Enola Gay, which dropped the atomic bomb on Hiroshima. Beyond that, unique aircraft include the first jet bomber, the Arado 23; luckily for Allied fleets of much-slower propeller planes, the Arado 23 saw limited service for Nazi Germany at the end of World War II.

And while the original Apollo 11 command module is downtown, the Udvar-Hazy houses more than the quarantine trailer. In Chantilly you can see the original flotation collar that frogmen attached to keep the module from sinking—in this case fitted onto an “egress trainer” version of the module.

Signage explaining the exhibits here is weaker than on the Mall, but the newer location compensates with a crack crew of 230 tour guides. “The docents at Hazy have wonderful backgrounds,” says one of their number, William Jackman. “Sometimes I feel like a fish out of water because I’m not a pilot,” adds the 74-year-old who is, nonetheless, a former vice president of the Air Transport Association and lifelong warplane buff. Docents delight in telling stories about the planes: What seems at first glance to be an ordinary Boeing 707 is actually, for example, the “Dash-80 test bed” for what became the first jet widely accepted by the world’s airlines. Its legendary test pilot, Tex Johnson, performed a barrel roll in the four-engine Dash-80—a shocking demonstration, but one that helped prove that jets were safe for use in flying passengers.

Some of the disparity between the two Smithsonians has little to do with their displays. The Udvar-Hazy is much harder to reach, with shuttle service between the Dulles location and the Mall having been discontinued when grant money evaporated a year after the new site’s 2003 opening. There is regular transportation from the airport, but drivers making the trip to the Udvar-Hazy get hit with a $15 parking fee—undercutting the lure of the free admission. (Federal appropriations take care of about half the combined $30 million annual budget for the Air & Space facilities.)

The Udvar-Hazy name, which rolls haltingly off most tongues, isn’t much help, either. It recognizes a $65 million gift from the Hungarian-born aircraft-leasing entrepreneur who is CEO of the most profitable unit of AIG—a parent organization lacking in respect for its own reasons.

Still, nearly all the growth in the Smithsonian Air & Space system is here. “Phase 2” at the Udvar-Hazy, now under construction, will house restoration work and offer homes to some of the collection’s 100 aircraft now out of public view. Additional planes on the Smithsonian’s wish list, including a World War II B-24 Liberator bomber and a Lockheed F-117A stealth fighter-bomber, also likely would go here.

Unlike most museums, which must pay dearly for exhibits, the Smithsonian gets most offered for free. One special acquisition now on display, a sleek European-built Air France Concorde supersonic transport, was a surprise gift from the French, made with the Udvar-Hazy Center in mind. “It was presented because they knew that this was the most popular museum in the world,” says Mr. van der Linden.

The remark may be his subtle attempt to introduce a Smithsonian vs. Louvre debate to upstage any suggestions that a real battle of the Smithsonians is going on. The combined attendance for the Washington area’s two Air & Space facilities, after all, this year could surpass the 8.5 million packed in by the Paris museum.

—Mr. Harris, a former Wall Street Journal reporter who covered the aerospace industry, is the author of “Pulitzer’s Gold: Behind the Prize for Public Service Journalism” (University of Missouri Press).”