The Met Offers a New Look at Americana 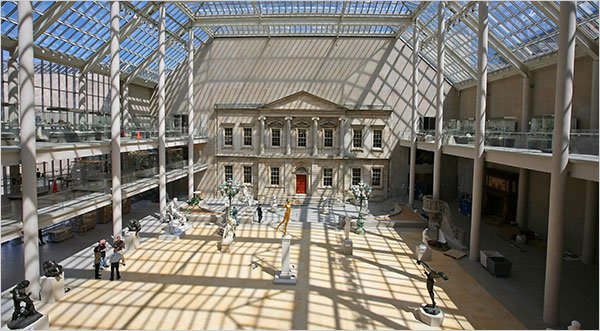 The renovated Engelhard Court at the Metropolitan Museum of Art now houses marbles, bronzes and other pieces that can be examined up close. More Photos >

In the early 1970s, when the Metropolitan Museum of Art unveiled a plan to create its own Crystal Palace in Central Park — a glass-enclosed, glass-roofed space to house its expanded American Wing — Community Planning Board 8 voted 24 to 1 against the proposal, and one board member called it a rape of the park.

The latest on the arts, coverage of live events, critical reviews, multimedia extravaganzas and much more. Join the discussion.

But the Met persevered, and in May 1980 the American Wing opened to rave reviews, going on to draw thousands of visitors every year to its 136,000-square-foot space — larger than many small museums — and its collection of American furniture, decorative arts and paintings.

But nearly 30 years is a long time in museum life: collections grow, visitors seek out the new, and curators have fresh ideas about how to do things. Now, after two years of construction and renovation, the Charles Engelhard Court — that light-filled pavilion punctuated by the Greek Revival limestone facade of Martin E. Thompson’s Branch Bank of the United States — will reopen on May 19, along with its period rooms.

The renovation completes the second phase of a larger $100 million project to reconfigure, renovate and upgrade the entire wing by 2011. (The first phase, in which the first-floor galleries received a makeover, was finished in 2007.)

On a recent rainy morning, as workers put the finishing touches on Engelhard Court, the chairman of the American Wing, Morrison H. Heckscher, could be found standing in the center of the space, surveying the proceedings. “There was never much art in here,” he said. “Since it was a garden court, the focus was on tranquillity. The only sculptures were in the planting beds, where nobody could get close to them.”

Now the space, with 30 percent more room for displaying work, is filled with some 60 monumental marbles, bronzes, mosaics, stained-glass windows and architectural elements, many placed so that visitors will be able to examine them at close range. Before, the sculptures were decorative; now they’re the focus in an effort to illustrate their importance in American art.

“Diana,” a bronze by Augustus Saint-Gaudens, is still the centerpiece, pointing toward the wing’s entrance, as she always has, although now she sits on a higher pedestal. “I call it the greatest weather vane in American sculpture,” Mr. Heckscher said.

Nearby, flanking the Tiffany loggia, are two white marble memorial reliefs by Daniel Chester French. “Previously they were on the second-floor balcony where nobody could see them,” Mr. Heckscher said. “They’re pretty big things to hide — they about weigh eight tons each.”

Also newly prominent is a carved limestone pulpit from All Angels’ Church, which the museum acquired when that West End Avenue building was demolished in the 1970s. Created by the Viennese-born sculptor Karl Bitter, perhaps best known to New Yorkers for the fountain in front of the Plaza Hotel, it is not the first example that Met visitors can see of his work. He also created four 10-foot-tall figures and six medallion reliefs that adorn the museum’s facade.

Next to the pulpit that day was a cardboard mock-up of a circular oak sounding board topped with a trumpeting angel. The real thing was waiting to be mounted above the pulpit.

There are other references to the museum’s facade here too. A pair of monumental French-style lamps are new to the court. Designed by Richard Morris Hunt, an architect who contributed to the museum’s 1902 facade and the Great Hall, they stood on either side of the entrance to the grand staircase until 1970, then were put in storage for decades. They have now been restored, and the lanterns surrounding the bulbs were replicated based on original drawings and vintage photographs.

Some of the space’s greatest hits, like the Tiffany stained-glass windows, have been seamlessly recessed into the architecture. And a new acquisition, an 1867 window by Henry Sharp called “Faith and Hope,” from St. Ann’s Church in Brooklyn, has been added too.

Whether sitting or wandering around the courtyard, a visitor cannot help taking in a new glass mezzanine and the original balcony above that is now glass-fronted. Here some 1,000 works of decorative objects will be displayed in cases that line three sides of the courtyard. They include the department’s latest acquisition: 250 examples of American art pottery made between 1876 and 1956 that were recently promised to the museum by Robert A. Ellison Jr., a New York collector.

In rethinking the collection, which has grown considerably since the court first opened (3,400 works have been added in the last 30 years), the curators decided to change the way decorative objects were displayed. Rather than grouping works by medium — say, cases of all silver — they will now be shown chronologically.

“Silver will no longer be isolated but shown with brilliant-colored ceramics,” Mr. Heckscher said. “It’s visually more exciting for our public.”

In addition to decorative objects, there will be two new cases devoted entirely to American jewelry, ranging from early-18th-century mourning rings to examples of Arts & Crafts pieces.

In keeping with the sun-filled, floating feel of the architecture, a new glass elevator leads visitors to the period rooms. Formerly a hodgepodge, they have been rearranged so that visitors, without even intending to, take an architectural journey, beginning with 17th-century Puritan Massachusetts and ending with an early-20th-century living room from a house in Wayzata, Minn., designed by Frank Lloyd Wright.

“There was never a rational way to get to the start of the story,” Mr. Heckscher said.

Technological advances have been made throughout. The lighting in the period rooms, for instance, is all fiber-optic now, which allows more precise illumination of individual works as well as a more historically accurate atmosphere in each room.

In researching the proper colors for the period rooms, Mr. Heckscher said, 30 years has made a giant difference.

“We’ve revived the craft of using hand-ground natural pigments within an oil base that over time will develop the right sense of patina,” he said. Before, modern latex paints were used, and they did not age well.

Most of the period rooms will have touch screens so that visitors can learn more about a piece of furniture or an object. Rather than getting a full image of what is selected, however, only a silhouette will appear.

The feature is intentional. Curators don’t want visitors concentrating on the screen, a hazard with such museum technology. Instead, Mr. Heckscher said, the goal is to get “people to actually look at what is in the room.”