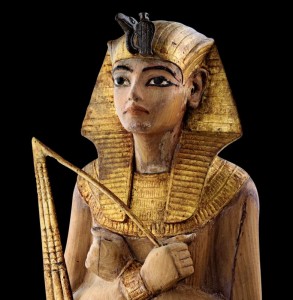 Posted on July 8, 2009 by Julianna Thibodeaux

Tutankhamun: The Golden King and the Great Pharaohs, one of the most high-profile blockbusters the city has seen recently, has just opened in unlikely quarters: the Children’s Museum of Indianapolis. This local institution, touted as the world’s largest children’s museum, is actually not such a leap: the behemoth building with its newly expanded Welcome Center — two additional dinosaur replicas penetrating the new stories-high wall of windows in a perpetual state of party crashing — has certainly expanded to fill its increasingly large paw prints … but in a measured and strategic way. It is in this sense that Tut is a surprise.

President and CEO Jeffrey Patchen, speaking to me in a telephone interview after I’d toured the exhibition with my three children — ages 14, 4 and 2 — admitted that, while such an awe-inspiring exhibition does fit in with the museum’s mission — “to create extraordinary learning experiences that have the power to transform the lives of children and families” — it is also a departure: At a member rate of $15 for adults and $8 for children (non-members pay $25 and $15, with some discounts available), with prices determined by exhibition organizers, the mere fact of a ticket price separate from regular museum admission is something the museum largely did away with years ago. But as Patchen pointed out, the museum would not have been able to pay the rental fee for such a blockbuster. And this one practically fell in its lap, like a dust shower inside an Egyptian tomb.

The story begins four years ago, when the museum, through the development of another exhibit, first allied itself with Dr. Zahi Hawass, secretary general of the Supreme Council of Antiquities in Egypt — referred to by Patchen as the real Indiana Jones — who invited museum staff to consult with first lady Suzanne Mubarak on the development of a children’s museum in Cairo. Hawass told Patchen, “We’ll work out some sort of thank you that’s appropriate.” And so it was announced, roughly two years later, that this latest Tutankhamun blockbuster would make its second stop (after Atlanta) in Indianapolis.

In order to make the exhibition more accessible, a $2 million grant from the Lilly Endowment was secured to underwrite the cost of free admission for 98,000 Indiana school students. Patchen told me more than 60,000 of these have already been claimed — so teachers reading this should act quickly to reserve their tickets.

While Tut is wonderful for the 8-and-up set (and museum literature promotes it as such), it is best not wasted on the younger ones. Taking my kids through Tut was more of a treat for me (and my 14-year-old) than it was for my younger kids; the beautiful artifacts displayed in moodily-lit galleries, some of which are organized according to what was found in the rooms of Tutankhamun’s tomb, while stunning, were so much statuary to my youngest, who kept trying to clear the security ropes to scale the pharaohs and funerary urns.

Save their ticket prices for the gift shop. But first hurry them over to Take Me There: Egypt, which reaffirms the museum’s excellence in installation development: Children (and their parents) can enlighten themselves about language and communication, urban and rural living spaces, the marketplace, care of the environment, and visual and performing arts in the country of Egypt, which many will learn for the first time is in Africa. Such a cultural immersion should do much to alleviate prejudice against the predominantly Muslim country, which too many Americans associate with terrorism and the events of Sept. 11.

While Tut is organized by National Geographic, Arts and Exhibitions International and AEG Exhibitions, the museum developed this new permanent but thematically-revolving installation Take Me There (replacing Passport to the World) to coincide with Tut. Take Me There: Egypt, open for the next two years, is free with regular museum admission; and as a companion to Tut, it does for children what Tut cannot: provide the kind of hands-on, interactive experience for which the museum is known.

Tutankhamun: The Golden King and the Great Pharaohs runs through October 2009. The museum is located at 3000 N. Meridian St. For tickets, visit www.childrensmuseum.org or www.kingtut.org.