THIS STORY HAS BEEN FORMATTED FOR EASY PRINTING
The Year in Arts: Art

A threatened closing, an arrest, a striking year 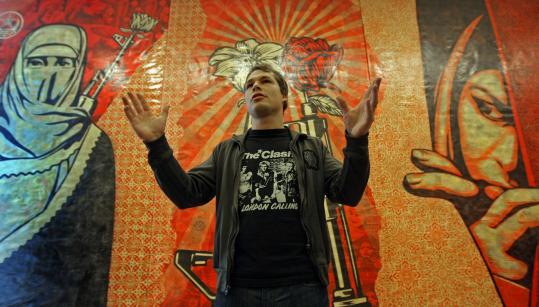 Your article has been sent.

A frankly incredible year in art kicked off in January with the announcement by Brandeis University president Jehuda Reinharz that the university would close its Rose Art Museum and begin a long-term plan to sell its art collection, which includes paintings by Picasso, de Kooning, Lichtenstein, and Rauschenberg. Having made the announcement, Reinharz proceeded to retreat to his office and watch the feathers fly.

And fly they did.

Many people sympathized with Reinharz’s predicament. He said he had been forced into the decision by a financial crisis at Brandeis. But he seemed blithely indifferent to the fact that the museum was self-sustaining and that much of its celebrated collection had been donated by people who were likely to resent their gifts being hawked.

The art world, the media, and a sizable swath of the public voiced strong opposition to the plan, and Brandeis eventually retreated - with mincing steps, it has to be said - from its original position: The museum would stay open, it promised, but it refused to rule out the possibility that art would be sold. Reinharz, somewhere in the midst of all this, announced his planned retirement.

Things got even weirder in February with - of all things - an arrest. Shepard Fairey, the street artist gone mainstream with a winning smile, a clothing line, and a letter of appreciation from Barack Obama, found himself bundled into the back of a police car as he showed up for a party at the Institute of Contemporary Art, where he was the subject of a major survey show.

For Fairey fans, the arrest was a bummer. Tickets to the party, which was in Fairey’s honor and was to feature him in the role of DJ (yet another of his talents), were not cheap.

But Fairey had bigger things to worry about than disappointing a few keyed-up revelers. He was already sinking into a quagmire of suing and countersuing over his use of an AP photographer’s image of Obama for his “HOPE’’ posters - posters that became ubiquitous during the presidential campaign and were now nuzzling their way into museum collections.

The arrest for graffiti-related activity, meanwhile, put him in a tough spot. Anti-graffiti campaigners wanted a high-profile scalp: Fairey was a dream target. But when Fairey, through his small army of lawyers and spokespeople, countered that, despite the quiet pride he felt in 13 prior arrests, he always made a point of doing everything by the book, the snarling guardians of subculture credibility wrote him off as a pandering, suit-and-tie-wearing goody-two-shoes.

He ended up pleading guilty to two charges - putting a sticker on the back of a street sign and hanging a poster on a condominium building. As punishment, he agreed not to carry stickers, wheat paste, brushes, or posters in Suffolk County for two years.

Embarrassing, sure - but worse was to come. In August, Fairey’s high-profile political activism and carefully chosen art-world appearances at places like the Venice Biennale were overshadowed by his admission that he had lied to a federal court judge about which photo of Obama he had based his “HOPE’’ poster on. He had also destroyed evidence to cover up his lie. His lawyers dropped him. Fairey continues to do his thing, but he looks a little tarnished.

The ICA, meanwhile, seemed happy. The crowds came, and the Fairey show gave the museum a national profile. But as the year progressed, the ICA’s many reasons to be proud of its achievements and sanguine about its future seemed to hit a few snags. In July, chief curator Nicholas Baume announced he was leaving to become director of the Public Art Fund in New York. And just before Christmas, associate curator Jen Mergel announced that she, too, was leaving to become senior curator of contemporary art at the Museum of Fine Arts.

ICA director Jill Medvedow took this poaching of her staff as a compliment, as well she might. But for all its successes, the ICA still looks isolated out there on its harborside perch (at least the parking’s easy). And now, at least in terms of exhibition programming, it’s also looking rudderless.

In May, controversy erupted over plans by the Isabella Stewart Gardner Museum to knock down the carriage house at the rear of the building in order to make way for a museum expansion designed by Italian architect Renzo Piano. The carriage house, with its striking, whimsical facade, was designed by Gardner herself in an attempt to enshrine her personal ideals and to give Fenway Court, as she called the entire property, an architectural resolution it previously lacked.

Several staff at the museum, along with concerned outsiders, tried to put a halt to the demolition just before the museum’s board voted to approve it. The museum’s director, Anne Hawley, surprised everyone when she admitted that she had not been aware of the building’s historical context until after she had presented plans for its demolition to the Boston Landmarks Commission. After the demolition, which went ahead amid great secrecy in July, Hawley wrote to the Globe expressing regret at losing a building that “dates to Gardner’s lifetime’’ (the choice of words avoided any acknowledgement of Gardner’s intimate involvement in the design) but confidence that, “were [Gardner] alive today, she would endorse this small sacrifice for the greater good of protecting her extraordinary gift to the public.’’

Another sad loss came in August when Hyman Bloom, perhaps the most significant painter Boston has produced in the last half century, died at 96 in his home in Nashua, N.H. An exhibition of his paintings and drawings that was already planned went ahead at the Yeshiva University Museum in New York. But dismayingly, almost every local museum with Blooms in its collection said it had them in storage.

Meanwhile, Nicholas Baume wasn’t the only contemporary-art curator to leave town. Bill Arning, after nine years as a trailblazing curator at MIT’s List Visual Arts Center, announced in January he would take over as director of the Contemporary Arts Museum in Houston. He was replaced in September by João Ribas, 30, who was born in Portugal, was a member of the band the Mooney , worked as a curator at the Drawing Center in New York, and has “an abhorrence of both consumer culture and infantilism, which is why I don’t own a pair of jeans’’ (except, as he later admitted to the Globe’s Geoff Edgers, he does).

The greatest exhibition of the year was, without question, “Titian, Tintoretto, Veronese: Rivals in Renaissance Venice.’’ This brilliant show about how rivalry and Oedipal competitiveness helped to spur masterful invention was intelligent, sexy, and tightly focused - a credit both to the MFA, its partner the Louvre, and the show’s curator, Frederick Ilchman.

Apart from that great exception, exhibition programming at the MFA felt sluggish. But by year’s end, the builders of the museum’s vast new Norman Foster-designed Art of the Americas Wing were putting on the finishing touches, leaving the museum staff with about 11 months to install approximately 50 new galleries.

What of New England’s other museums? The DeCordova Sculpture Park + Museum continued to reorient itself under the reins of new director Dennis Kois, who wants to emphasize the beloved sculpture park and raise the quality of work all round. In 2009, the exhibition program felt thin, but the imported summer exhibition, “The Old Weird America,’’ was a deserved hit.

The Peabody Essex Museum put on an eclectic mix of strong shows, ranging from fashion to Dutch seascapes and Chinese contemporary art. MIT’s List Center seemed unusually subdued: It mounted a dynamic show by Matthew Day Jackson, but nothing much else got the blood flowing.

Harvard Art Museum, which is in the early stages of a long renovation, did a good job of staying entirely below the radar. And the Massachusetts Museum of Contemporary Art, too, had a disappointing year after the highs of 2008, when it opened its massive Sol LeWitt wall-drawing retrospective. But the nearby Sterling and Francine Clark Art Institute produced, in “Dove/O’Keeffe: Circles of Influence,’’ a terrific show, both scholarly and seductive.

Test your knowledge of the past yearwith our interactive quiz.
Your comment is subject to the rules of our Posting Policy
This comment may appear on your public profile. Public Profile FAQ